The test day begins uncomfortably: continuous rain, hardly any wind, thick fog – so we start below deck! Fortunately there is a lot to discover here too. The Beneteau Oceanis 46.1 is, like the entire Oceanis fleet, one of the most successful sailing yachts at the moment. The 14.60 metre long boat was sold 150 times, just in the last season. Our visit on board shows that this is not only because of the market dominance of the French shipyard. 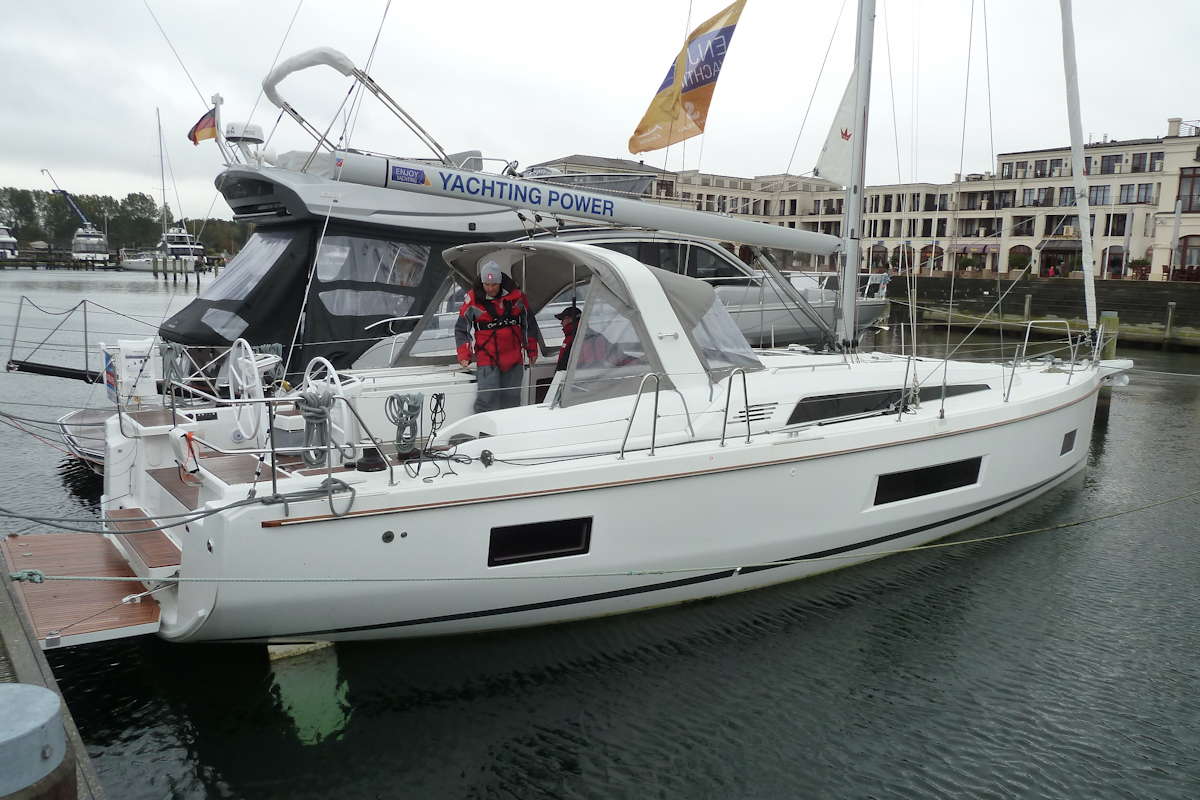 Before the start to the Baltic Sea © Michael Krieg

Due to the weather conditions prevailing until midday, we hide below deck for the time being. A varied room layout is possible below deck: The Oceanis 46.1 can be ordered with three, four or even five cabins. And even the four-cabin version has a bathroom for each room.

Much, much light and high quality below deck

Unlike the slightly larger Oceanis 51.1, which was drawn by Berret/Racoupeau, our test ship is built according to plans by Finot-Conq. Nevertheless, both sailing yachts look very similar with low superstructures and modern hull lines.

Everything appear to be high-quality and comfortable, even at second glance. The boat, for whose design below deck Nauta Design is responsible, appears as if it is filled with light. Numerous windows in the hull are standard. The many openings in the cabin superstructure create a light-flooded ambience. Pleated blinds and concealed sliding blinds prevent unwanted views from outside.

The walls are clad with light-coloured plastic panels. This forms a nice contrast to the furniture in matt lacquered mahogany colour. If you want it even brighter below deck, you can order the furniture in light oak veneer. 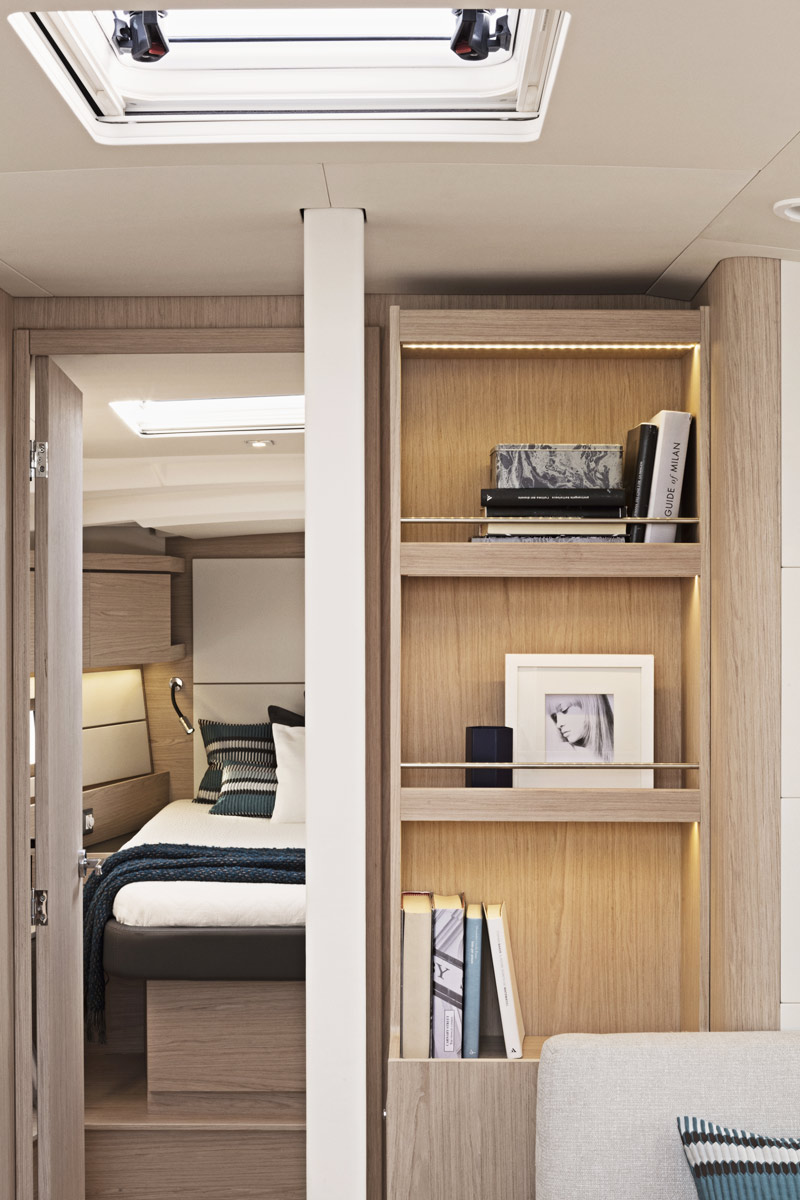 The library onboard © Guido Barbagelata 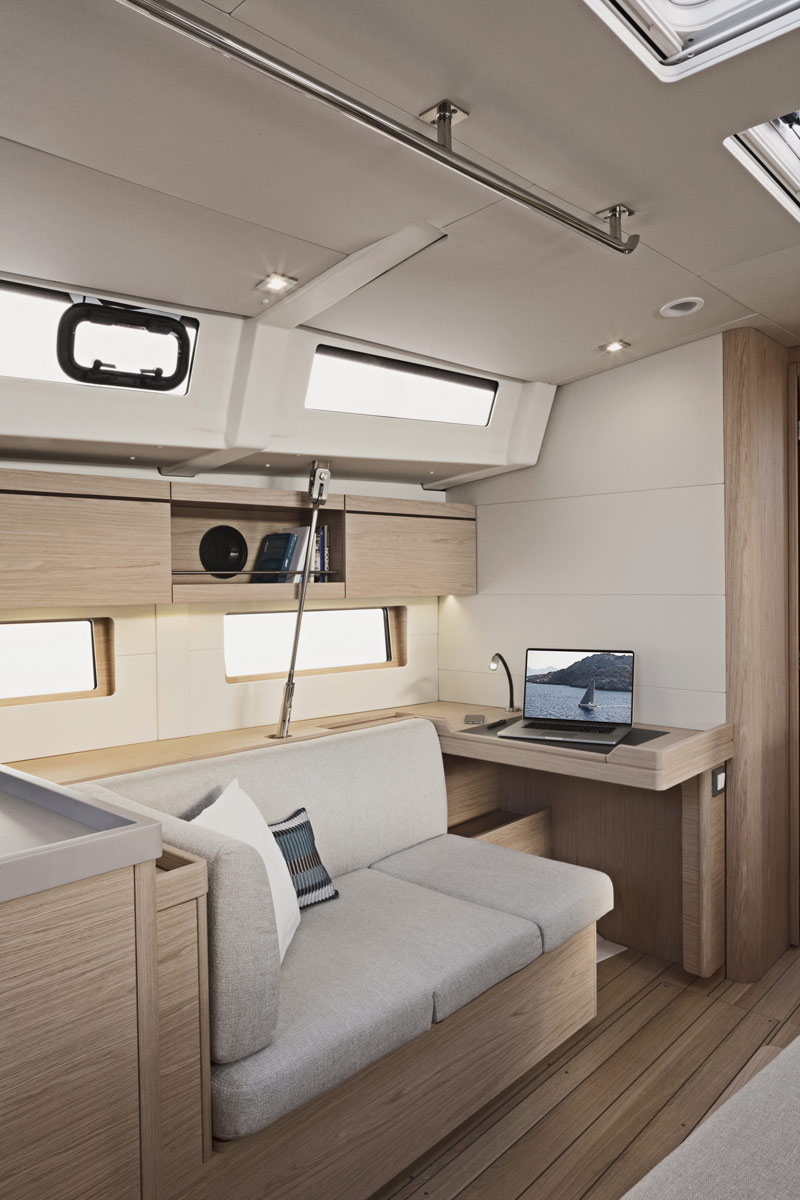 The large bookshelf for a small on-board library is beautiful. Books for long evenings in the harbour are ready at hand along the main bulkhead, right next to the access to the owner’s cabin. For the long trip there is plenty of storage space in cupboards.

Beneteau offers a total of four cabin layouts. In the standard three-cabin layout, there is an L-shaped galley to the left of the companionway and a fairly large bathroom with separate shower opposite. This is followed by a stately saloon settee. Around the saloon table there is space for up to six people. 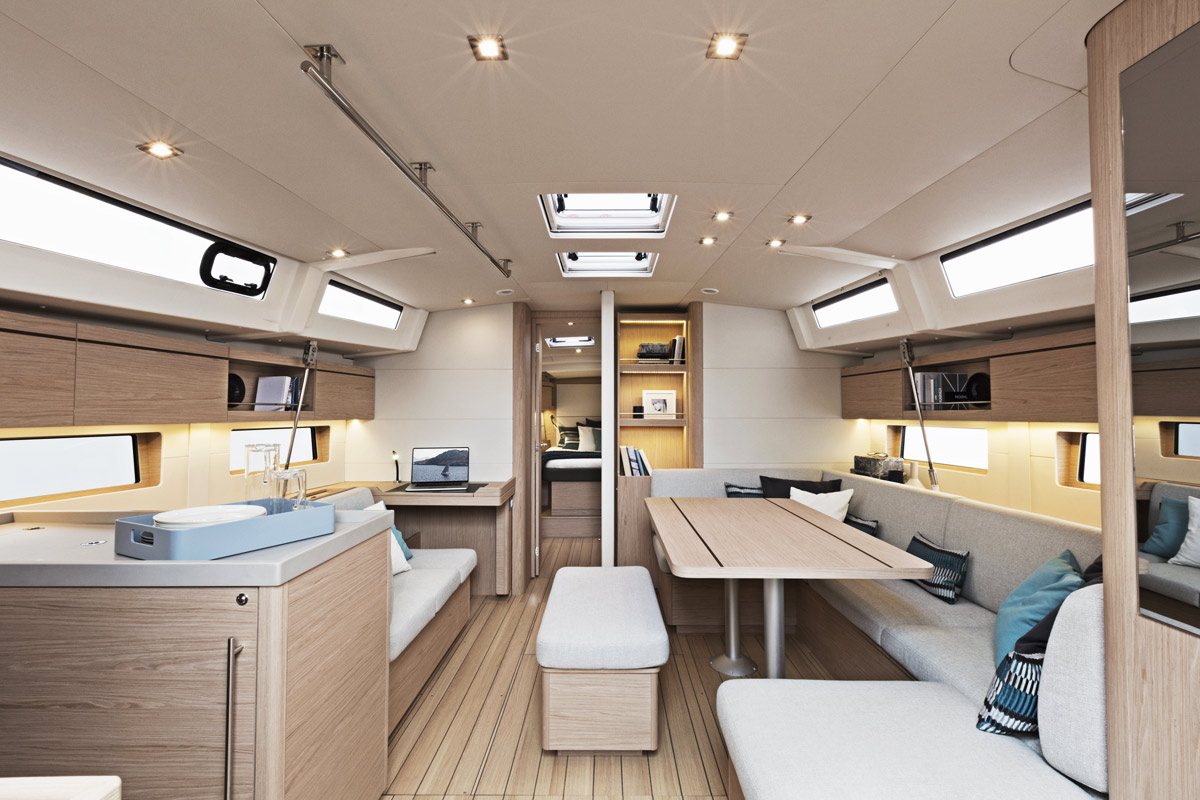 Directly opposite, in front of the galley, there is even room for a small chaise longue, an upholstered couch with headrest as a so-called owners corner. There is also a navigator’s seat with a view in the direction of travel. However, this is located at the main bulkhead and thus quite far from the companionway.

On our test ship we come across the second furnishing option: Here the port side is dominated by the longitudinal galley. The advantage here is that two guests have space to work and cook in large areas next to each other. The L-pantry is more seaworthy, but when the boat is healing, the centrally placed furniture – with automatically retractable TV screen inside – offers plenty of support. 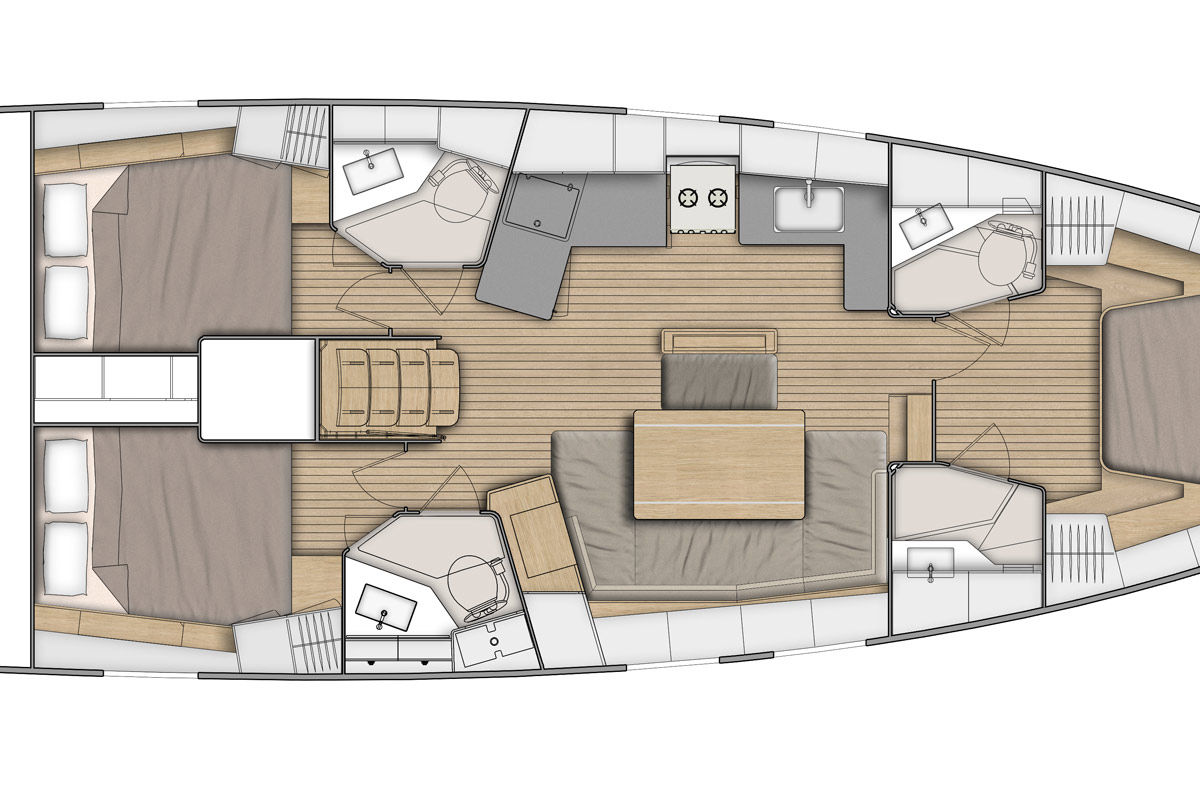 Version with longitudinal galley and separate head in the bow © shipyard

For this constellation, however, the chaise longue and the navigation seat had to make way. The latter then lies with its seat backwards to the direction of travel at the salon seating group. As an option for the galley, a foot pump for seawater is available at the sink.

We are on board the upscale charter version: it is also suitable for large families, as there are three cabins with their own bathrooms. These heads are accessible both from the respective cabin and from the saloon. This means that the bathrooms can be used by the entire crew during the day. There is sufficient headroom throughout the ship.

The aft cabins are a place worth living in with wardrobe, plenty of storage and daylight through the hull window. Openable hatches to the cockpit and to the helmsman enable cross ventilation. 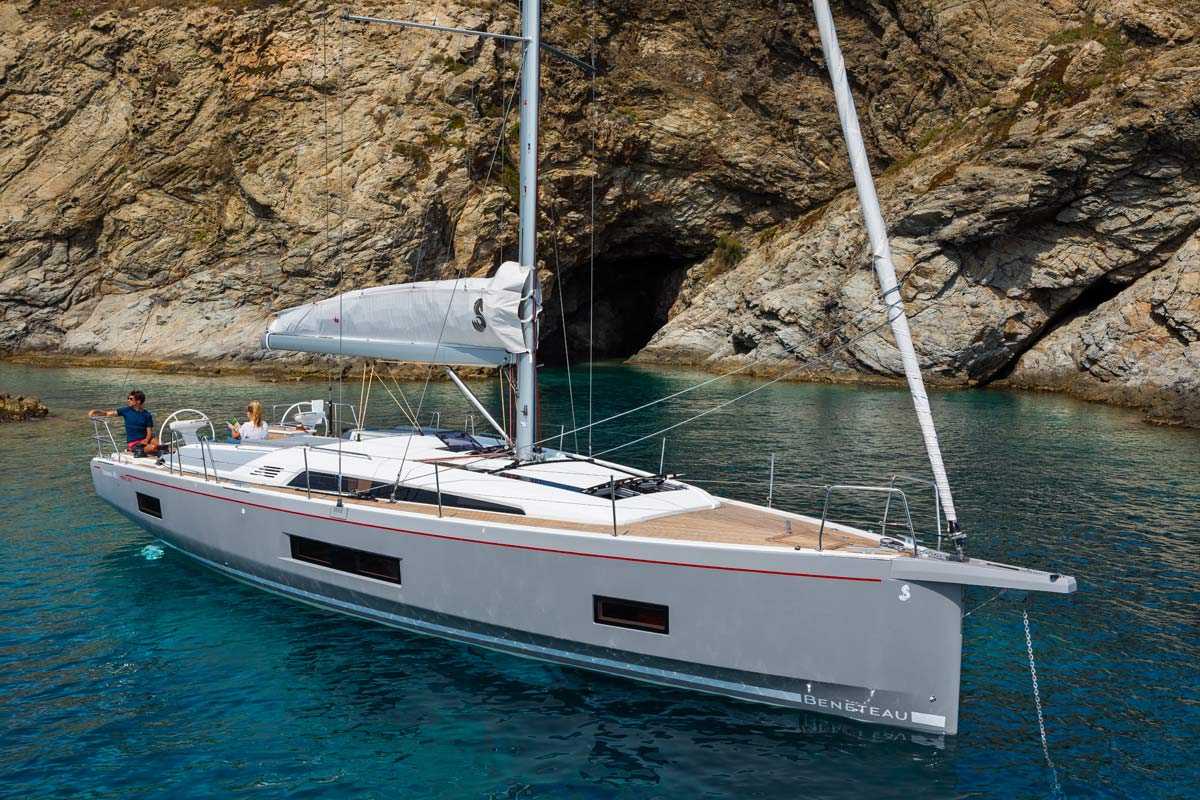 Many hull windows for much light in the cabins © Guido Barbagelata

The owner’s berth in the bow looks almost royal: there is a 2.05 x 1.60 metre island bed, voluminous cupboards and additional storage. The view through the hull windows is beautiful and works also while lying down. By the way, the head is divided into two: on port side with shower, opposite with toilet. And both have their own wash basin.

Space below deck for up to ten people

The layout can also be extended to four or even five cabins, with a longitudinal bulkhead dividing the owner’s cabin. The shower cabin then becomes another complete bathroom, so that each double cabin has its own bathroom with shower and toilet.

In the five-cabin version, the crew of the two aft cabins will have to share a bathroom opposite each other instead of the starboard head. 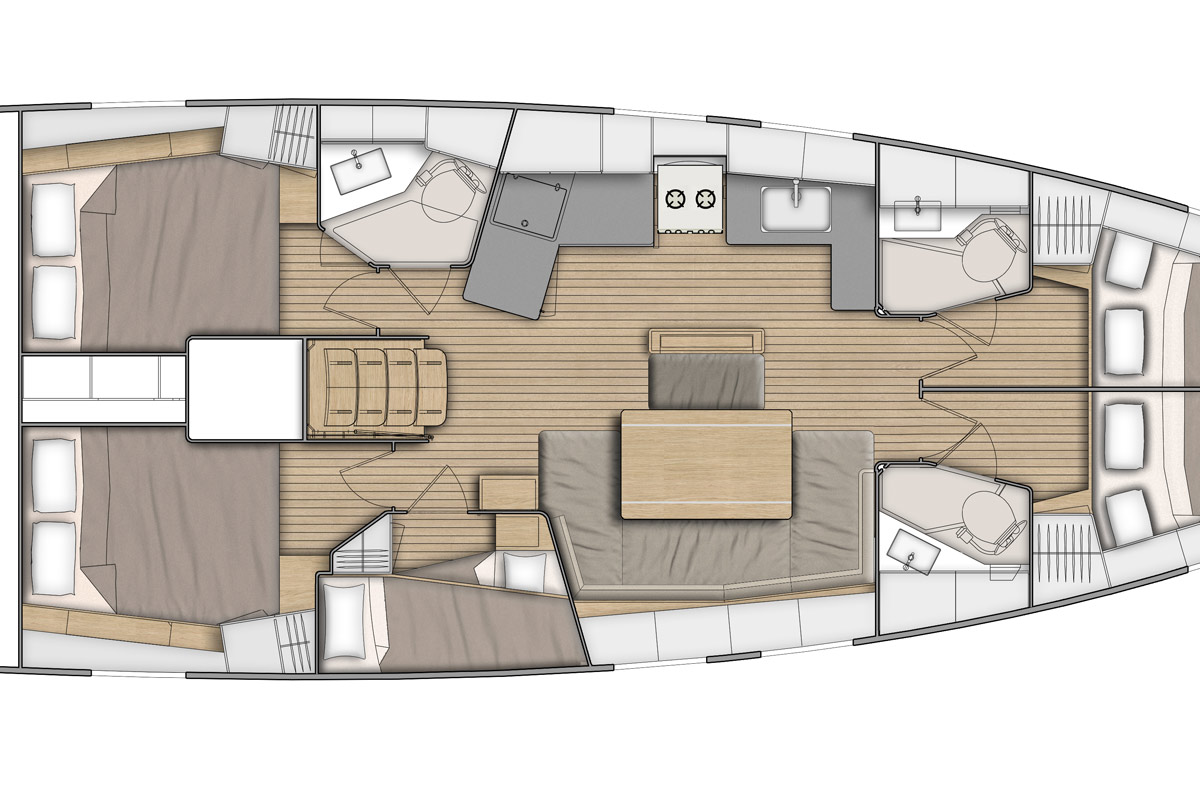 Five double cabins and three bathrooms – could be narrow © shipyard

Nine to ten people on board, however, should push the space available to its limits even on a 46-foot ship. The three-cabin version, the one which we are testing, is also attractive for charter. A few days later she will sail for a charter company in Greece. That means: Caution!

The Baltic Sea is almost too small

In the moment we have had a good look around below deck, the weather changes abruptly: The wind freshens up, disperses the fog and gives the test crew a stormy pleasure with gusts. That this kind of sailing still remains a pleasure is clearly due to the potential of Oceanis 46.1. 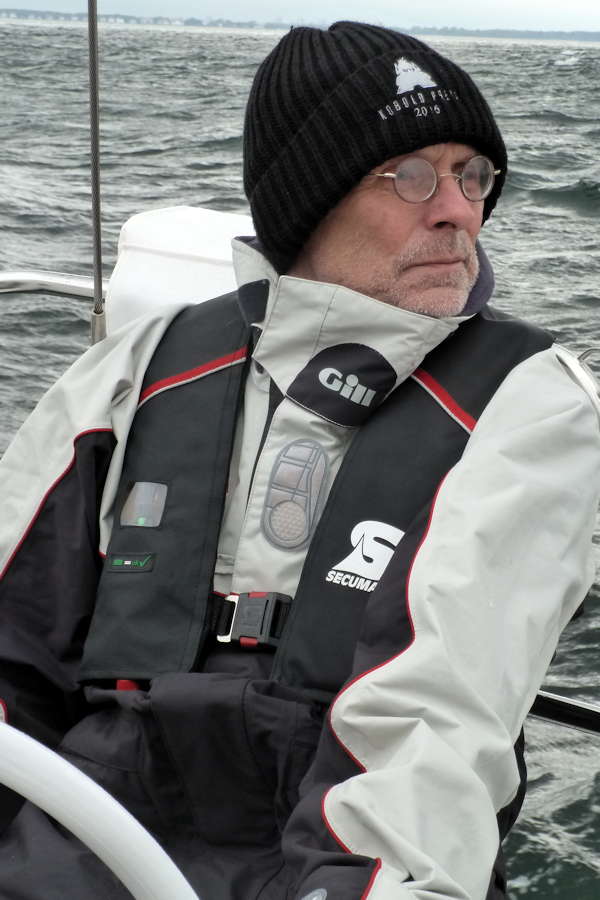 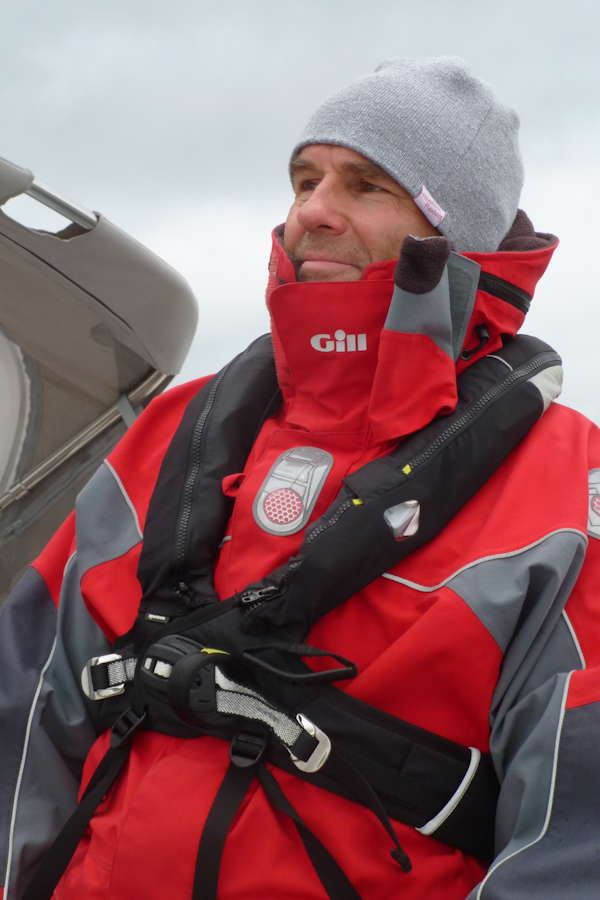 Because the Beneteau Oceanis 46.1 is made to be free: Beneteau defines the target group as families and cruising sailors who also like to go on long trips. But “the Baltic Sea is almost too small for that”, says Lars Reisberg from Enjoy Yachting, who provides us with the sailing yacht. 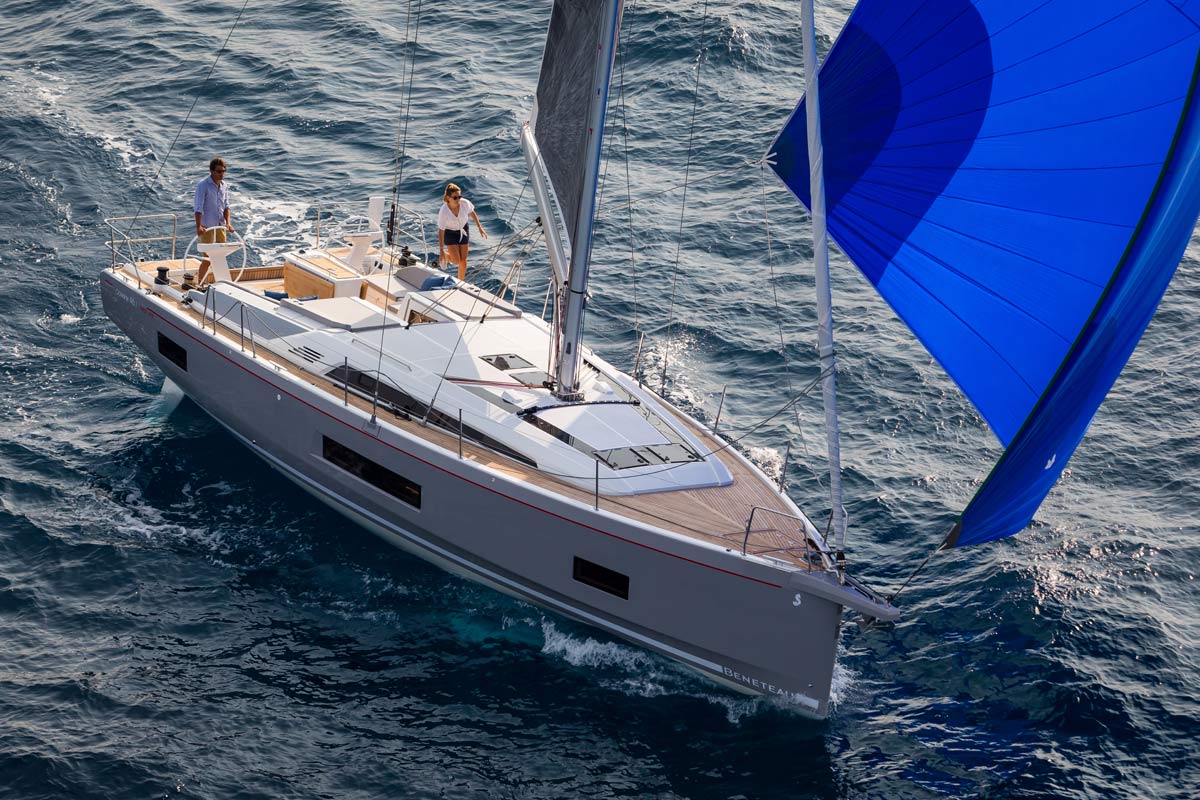 After leaving with engine power – with the larger 80 HP engine, which reaches almost seven knots at 2,000 rpm – we go to the first reef. After all, there are up to 25 knots of wind, in gusts even more than 30, so no sunshine cruise. It soon turns out that the prevailing conditions are too easy for our Beneteau.

Even with a simply cut Dacron sail, the ship’s potential is impressive. With the optional furling mast, we quickly adapted the sail area to the prevailing conditions. 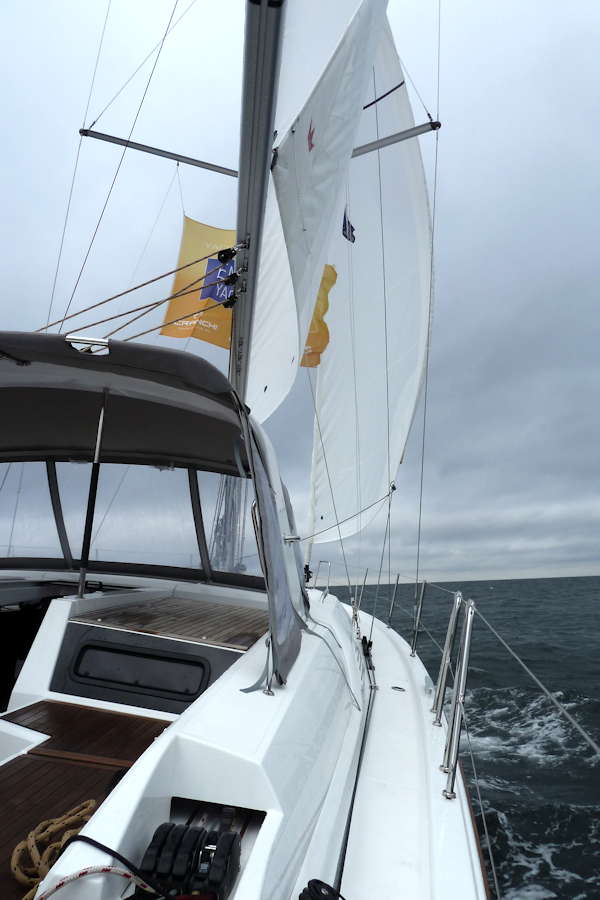 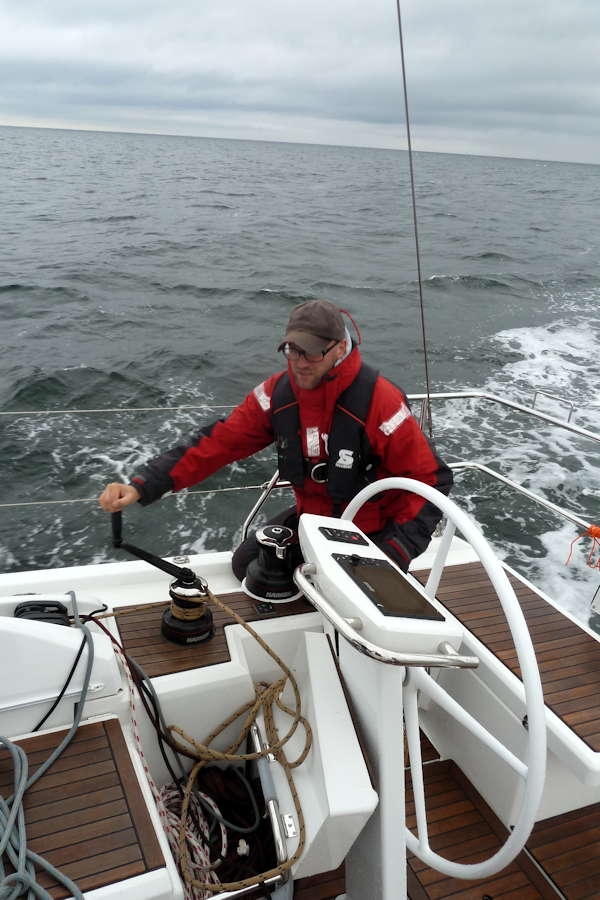 As standard, the Beneteau is supplied with a self-tacking jib. Our test yacht is equipped with an overlapping furling genoa. An up to 116 percent overlapping genoa is possible because the lower shrouds are located on the cabin superstructure. As an extra you will also need laterally mounted bulkhead rails. This opens the passage to the bow, which is good for safety.

For additional sails such as gennaker or code zero, a bowsprit can also be mounted as an extra. The shipyard offers additional tuning for this purpose: the range of products on offer includes an approximately one metre longer carbon mast with hydraulically adjustable backstay and high-quality laminate sails with 28 percent more sail area and overlapping genoa. Higher quality deck equipment and a deep keel with lead bomb are also on offer. 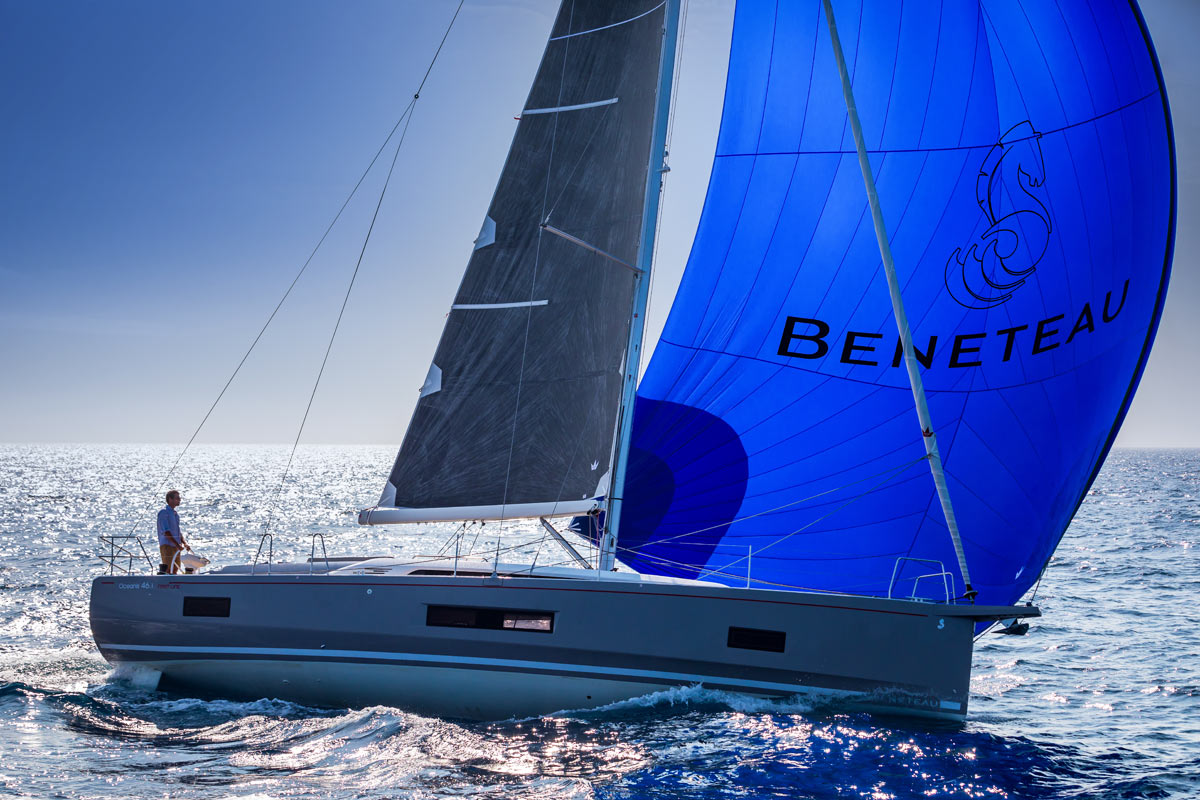 The cockpit is huge

Halyards and sheets are accessible from the double steering position. So the yacht is easy to handle even with a small crew. Directly in front of the steering wheels are the stowage pockets – with a fixed lid they hold the lines. Folding platforms provide the helmsman with a secure position.

The cockpit is huge: it can comfortably accommodate up to eight people. In addition, there is plenty of space for sunbathing in the harbour or at anchor – on the cabin roof on both sides of the companionway and next to the companionway. If the boat is on the way, the sailors can lean against the large cockpit table. 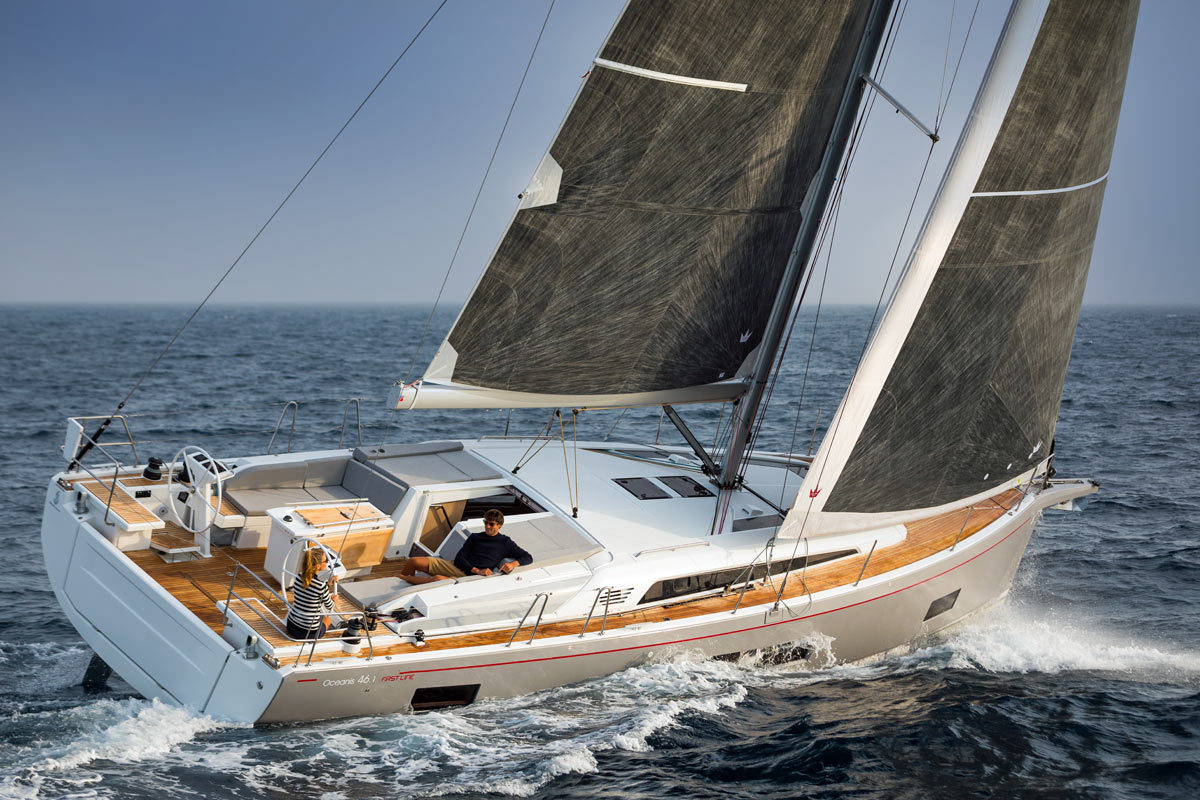 The striking chine edges, which extend all the way to the bow, give the hull a high degree of form stability. The boat can therefore be designed much lighter. Thanks to this weight saving, she steers so agile that we hardly notice any difference 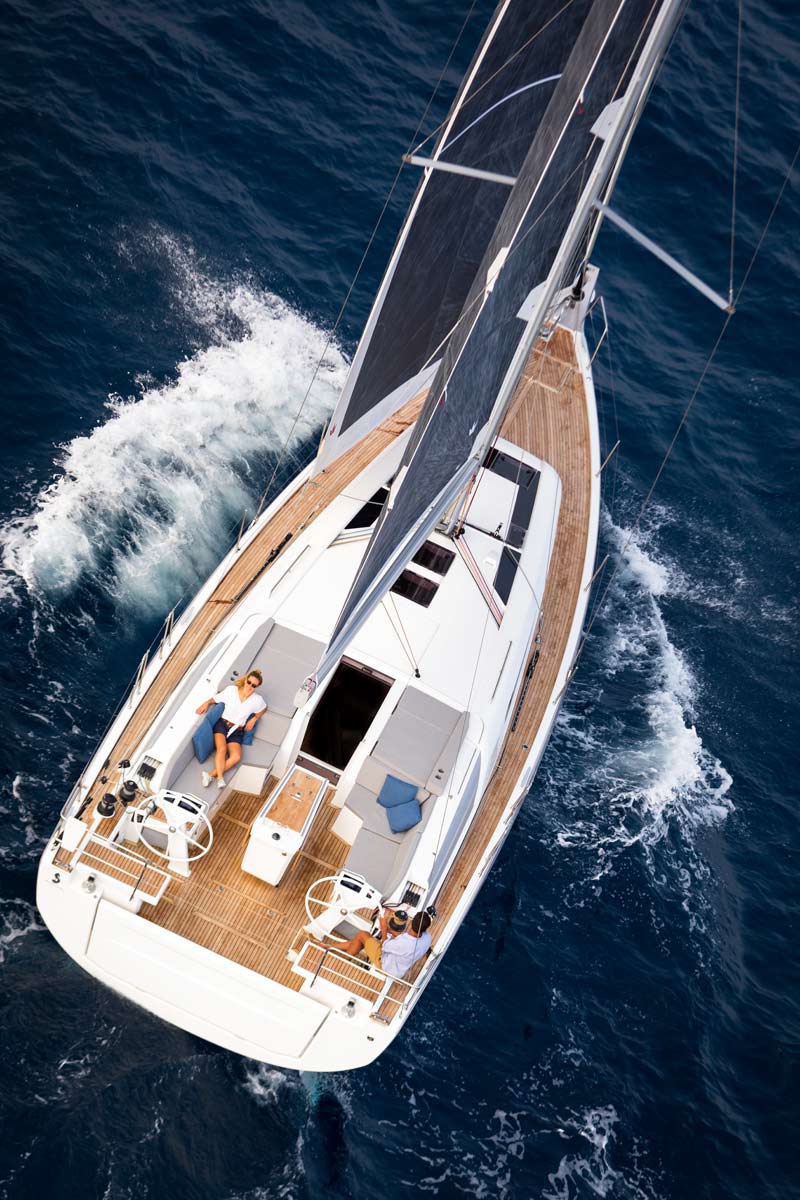 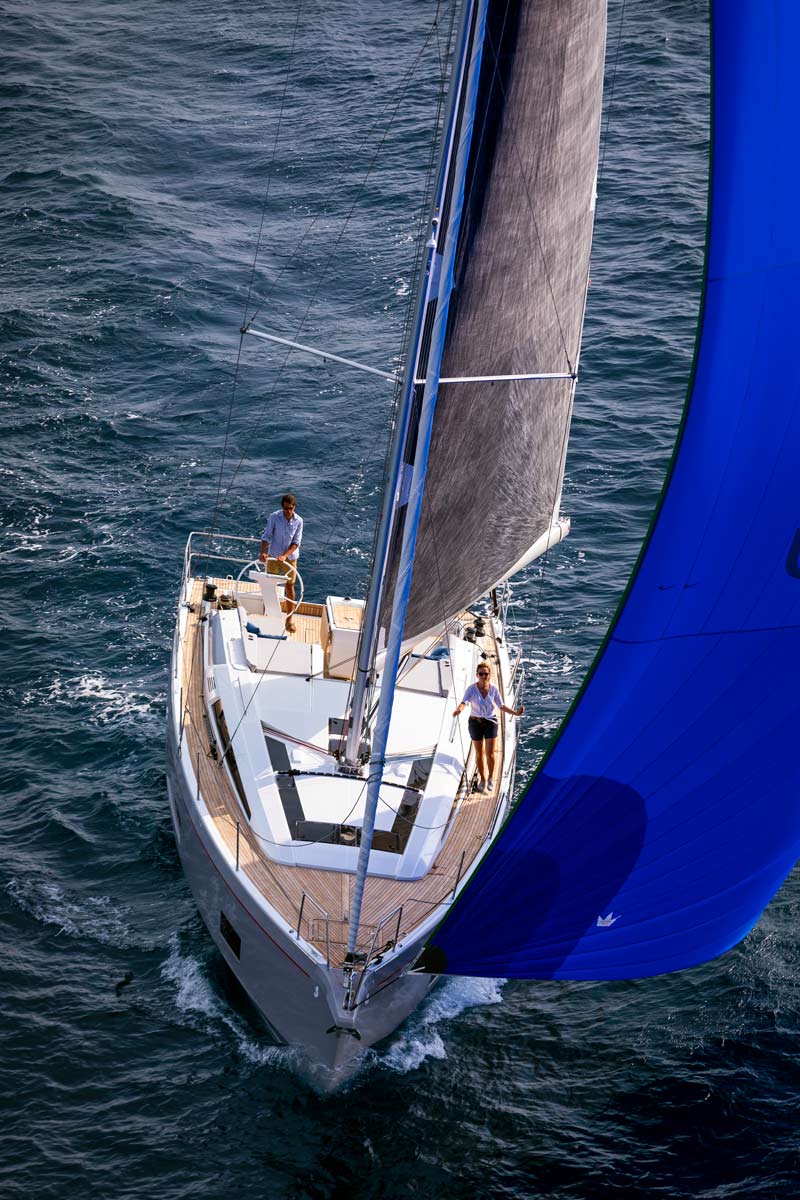 ... and stable even when heeling © Guido Cantini

Thanks to the twin rudder, the Oceanis 46.1 is easy to steer, even with large heel. There is no danger of loosing control, because at least one of the two rudders always shows full effect. However, because the two rudder blades are each small, the feedback for the helmsman is less noticeable than with a single large blade.

Up to nine knots speed

Stoically, our ship pushes through the Baltic Sea even in more heavy conditions now and with waves up to one meter high. We do not reach the hull speed of almost nine knots because of the strongly reefed main. But at least on deeper courses we are still up to seven knots fast. It’s fascinating what can be achieved with the new hulls due to their shape and performance. 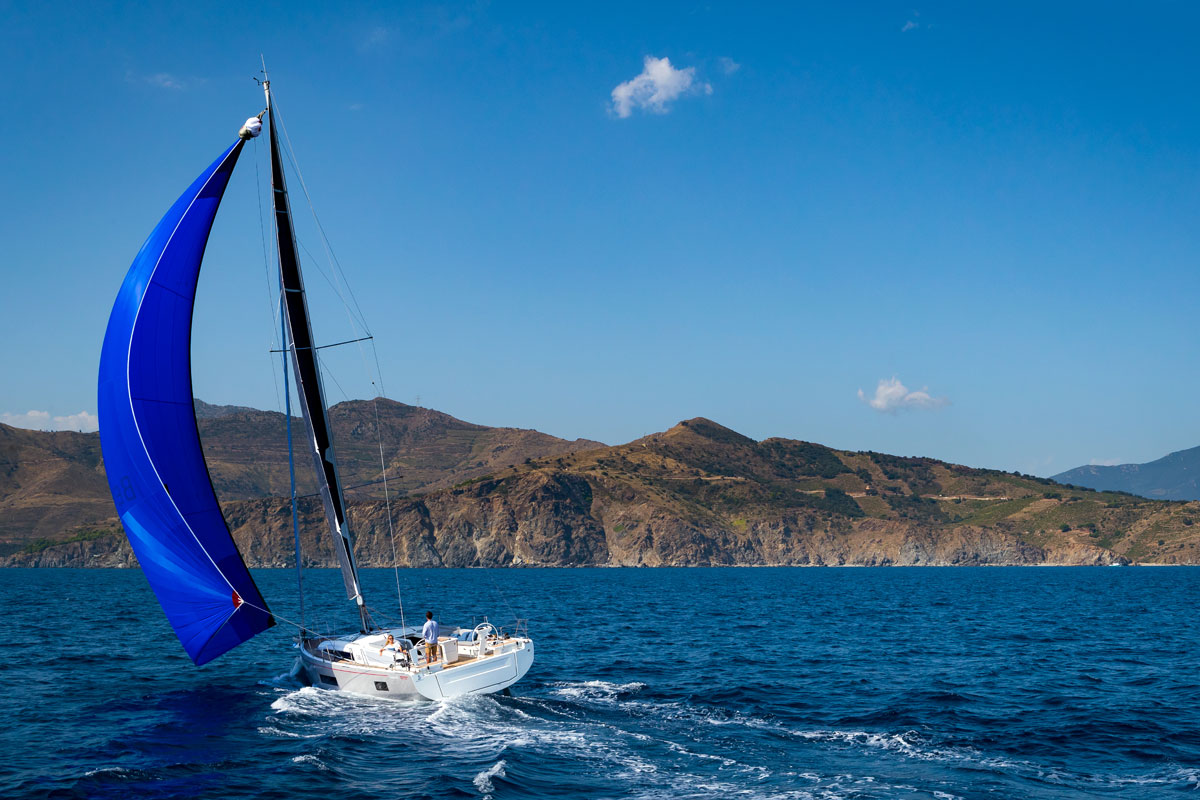 Up to nine knots are possible with optimal sails © Guido Cantini

With the Oceanis 46.1, Beneteau has designed a family yacht which, with the appropriate fittings, is also very well suited as a charter boat. A balanced mixture of large volume, a certain elegance and – with the appropriate upgrade – very good sailing performance, she appeals to a wide audience. The sales figures so far have already proven it.

How much for the fun? The already well-equipped basic version starts at 268,000 euros. That is a pleasingly good price/performance ratio. Our test ship, has a price tag of 422,000 euros. The transport, rigging and antifouling are included. 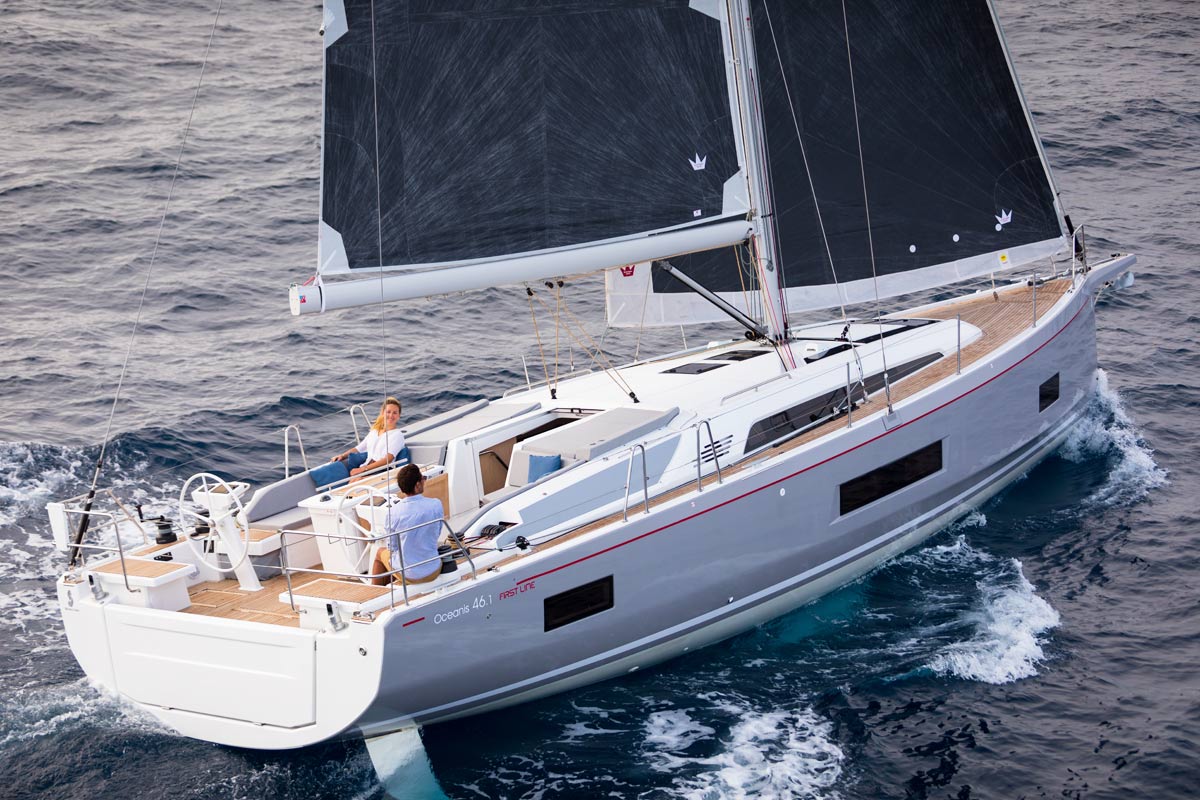 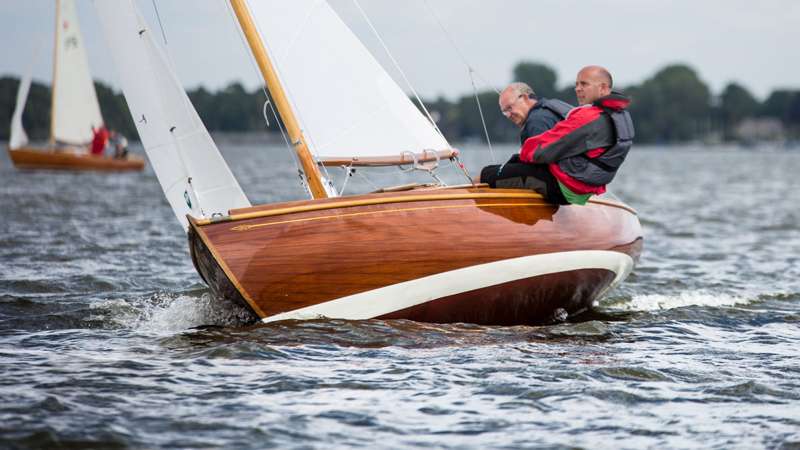 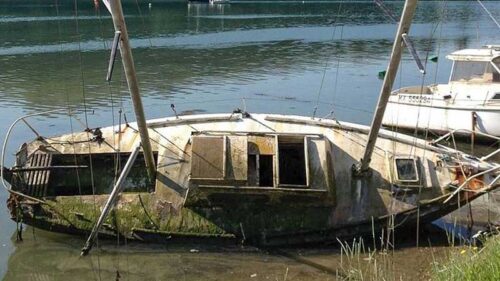 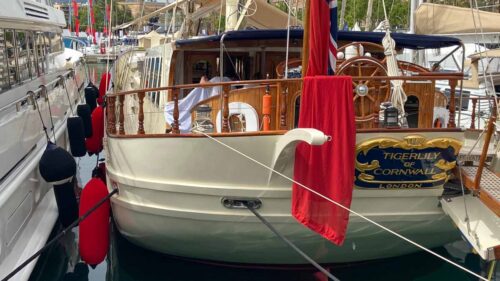 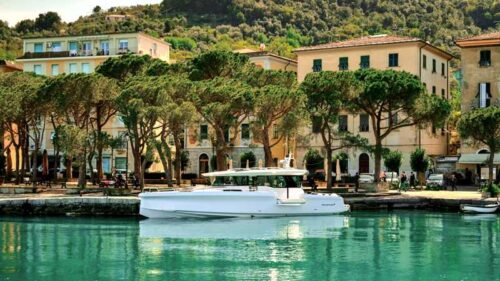