It may be his first Vendée Globe, but Charlie Dalin is taking it all in his stride. The fleet are now halfway around the world and have been at sea for about five weeks. Charlie has led the fleet for three of those weeks. The 36 years old french sailor was happy with the state of his boat and had no major issues to address.

On Monday 14th December at about 1800 hrs UT he reported hearing a loud noise whilst reaching in a south easterly direction at 18 knots of boat speed. He immediately slowed his boat, Apivia, in the Southern Indian Ocean just 900 miles south west of Tasmania, and saw he had damage to his port foil system. He confirmed pretty quickly that he does not think he hit anything, as his foil is intact, but he has an issue where the low fulcrum rests as it leaves the boat. He had no water ingress, and his team, back home, worked quickly on a plan to solve the issue so Charlie can race at full speed once more. He has spent the day focussing on strengthening the foil attachment to make sure the casing remains secure. Having lost 120 miles to the lead in the process it does look like he is back to racing at full speed with the front boats once more.

The fleet have not encountered any traditionally bad weather yet for the Southern Oceans and the few depressions they have been through on this race, Charlie has likened it to being at war. He has managed his boat well often furling his storm sail and riding out the worst of the conditions under a deep reefed mainsail alone. The weather currently dominating the Indian Ocean is a big high pressure that is spreading and making progress difficult for the whole fleet.

They have all been sending video and images of blue skies and flat water with light winds that we are not used to seeing from this location on the planet. We await what the Pacific will bring, as we should be seeing the front boats of Yannick Bestaven on Maitre Coq, who is leading for the first time, Thomas Ruyant on LinkedOut – who reported incoming water in the bow compartment yesterday evening – and Charlie Dalin onboard Apivia extend away from the following peloton as they commence their route into the Pacific Ocean. 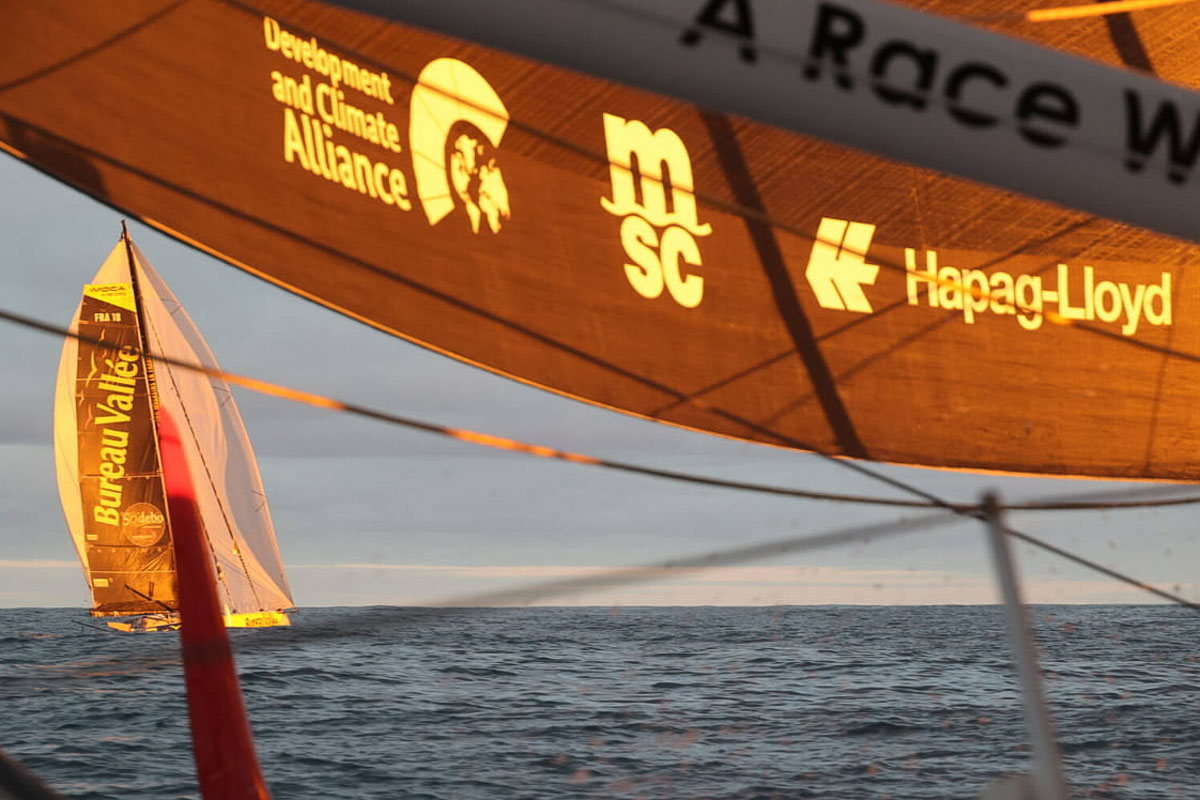 Never been off the podium

Charlie Dalin was a race favourite from the outset of this race and one that I proposed for a podium place when float asked me for my predictions back in October before the race set off. In his racing career Charlie may not have landed the top spot in the Figaro but he has never been off the podium. It was his warmup race in his newly built Imoca Apivia, in 2019 when he won the Transat Jacques Vabres with co skipper Yann Elies. He quickly followed that early this year with a second place in the Vendee Arctic Race behind Jeremie Beyou in Charal.

His boat was designed by Verdier and built at CDK Technologies but Charlie, himself a Naval Architect, had a lot of input in the design process and the build process, making sure he got the boat he wanted to suit the way he sails and his ambitions of being on the podium in the Vendee Globe. Apivia was designed by Verdier and built at CDK Technologies... © Yvan Zedda / Alea

Charlie Dalin was part of the Macif group of excellence and was selected to race in their Figaro programme before being selected to represent Apivia Mutuelle, a subsidiary of the Macif Group. The whole project has been managed by Mer Concept in Concarneau, Southern Brittany, which was set up by Francois Gabart in 2006.

By using the experience of Gabart and his team from his winning Vendee Globe entry of 2012 and his fastest solo circumnavigation in 2017 onboard the 100’ trimaran ‘Macif’ of 42 days 16 hours 40 minutes and 35 seconds, Dalin has surrounded himself with experience and excellence. He even went training with Francois Gabart and Pascal Bidegorry. The three of them went for a training sail together to help fast track Charlie to being proficient and confident in how he was handling his boat. I have been lucky enough to race a Rolex Fastnet Race with Pascal and he is so knowledgeable and focussed and he does not waste his time on people without the right attitude. But he is also a lot of fun to sail with, he genuinely enjoys the racing and is very funny at times. I can only imagine what an opportunity to sail with both these legends could uncover. Just a little tip here and a suggestion there could allow you, as a new IMOCA sailor, to make such huge gains. The opportunity to be a sponge and absorb as much of their race winning experience as possible would be amazing.

Charlie displayed a little frustration early in the race when he was annoyed for not being as aggressive as Alex Thomson on Hugo Boss when sailing through Storm Theta. Charlie had backed off a little and given the tropical depression a wider berth and as a result he had lost a few miles. These were quickly gained again as the boats came through the doldrums and accelerated into the Southern hemisphere. 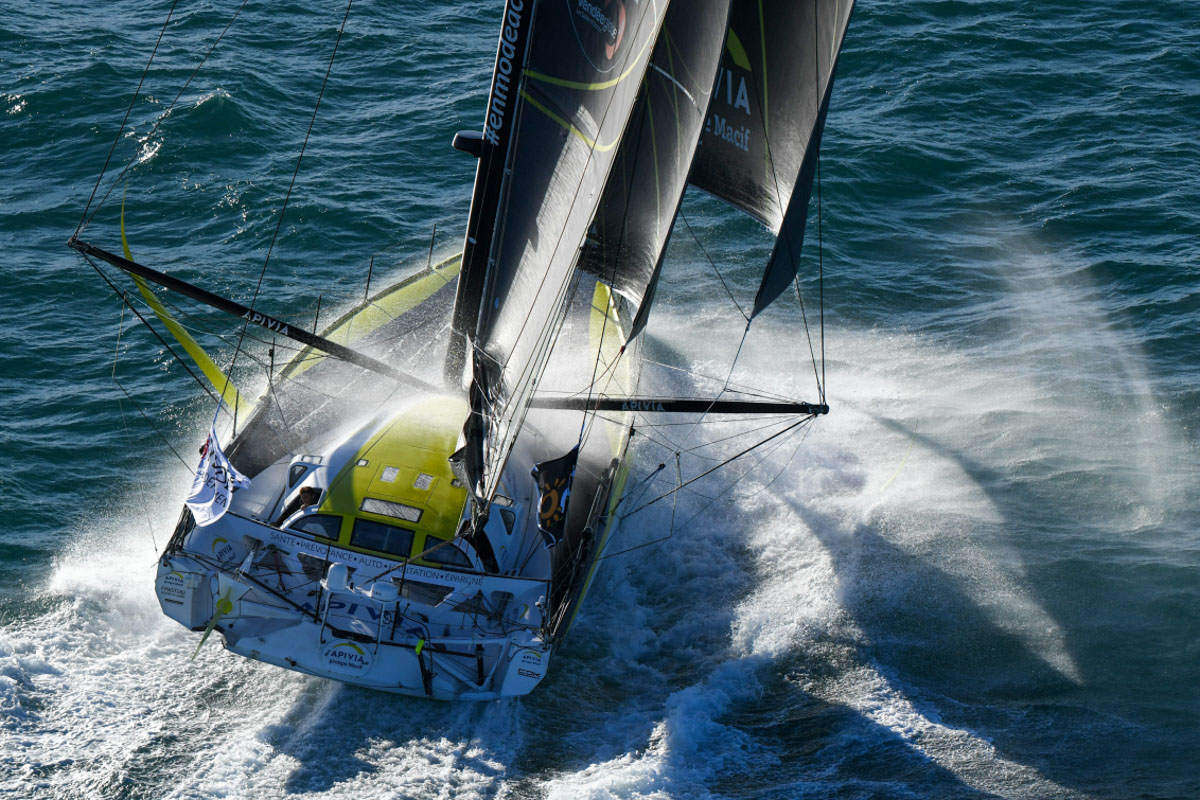 I think Charlie soon realised that it was not a mistake but one of many decisions he would make with the long-term goal in mind, and there would be remarkably similar ones to make further along the Vendee Globe route. Each time planning his strategy for dealing with each depression and increase in wind encountered, to place himself and his boat in the best position to make the best speed with least risk. It is all about risk and reward and we have seen Charlie perform a very mature race for one so young and with no Southern Ocean racing experience. He is sustaining a great average and is managing himself and the boats speed very well. 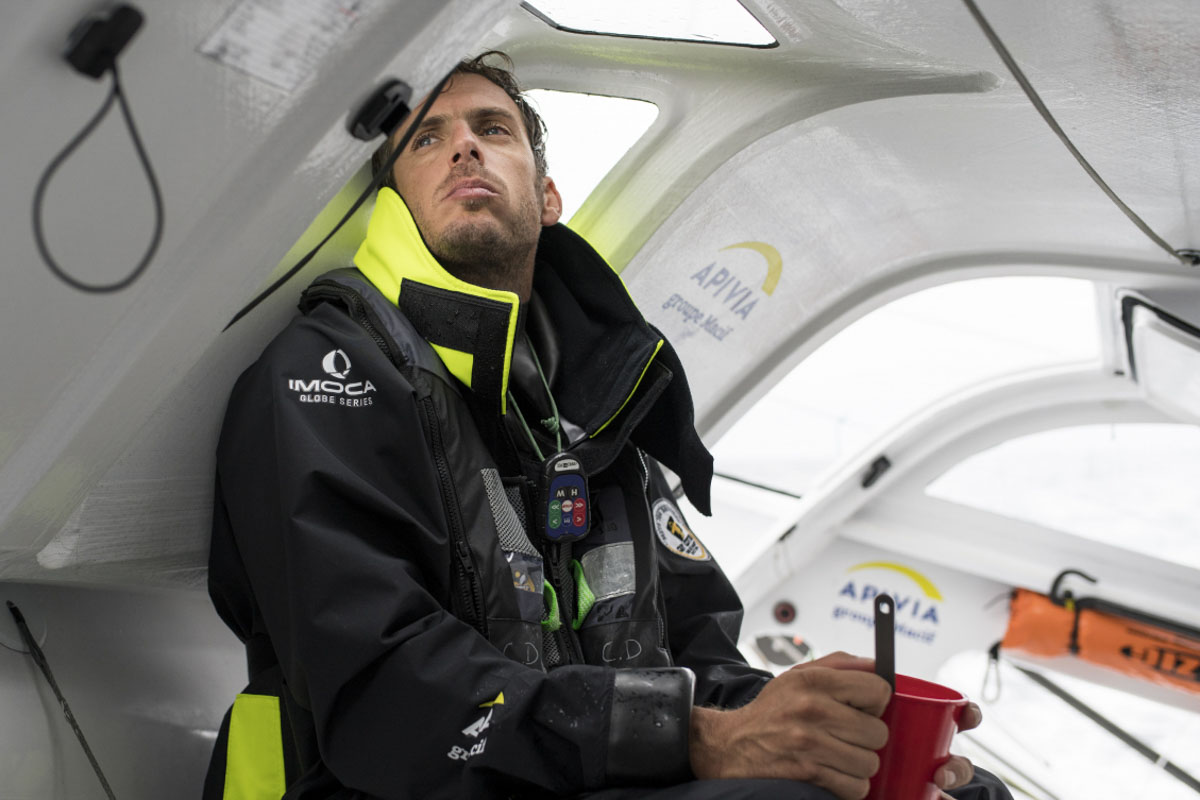 Sailor and a logical and balanced naval architect

Originally from Le Havre on the North coast of France, Charlie started sailing at the age of 6 years old, whilst on holiday in Brittany. No surprise really that he has gone on to become one of the established young talents in solo offshore racing. As a naval architect, Charlie is very logical and balanced. He shies away from emotional outbursts to maintain a focussed outlook where he can analyse the outcomes and deduce the best plan. He has worked within an America’s Cup design team in the UK, hence he is as comfortable communicating in English as he is in French. He is also able to add the coveted title of Elite French Singlehanded Offshore Racing Champion to his accolades. A title he has won on two occasions, once in 2014 and again in 2016. Charlie has been meticulous in his preparation and planning for this race and so far to date he has executed it very well. He would have been looking to be in the best physical shape, be prepared technically to manage his boat and be in the best place mentally to take on the endurance race like no other of the Vendee Globe. Luck plays a part in everyone’s Vendee Globe story and so far, Charlie Dalin is writing a fairy tale. He may be fulfilling a dream right now but that is reflective of the cause he supports with Apivia Mutuelle and their partnership with Association Petits Princes. The relationship aims to fulfil the dreams of sick children and adolescents by giving them an adventure in offshore sailing with Charlie. So far this has been one sweet dream!