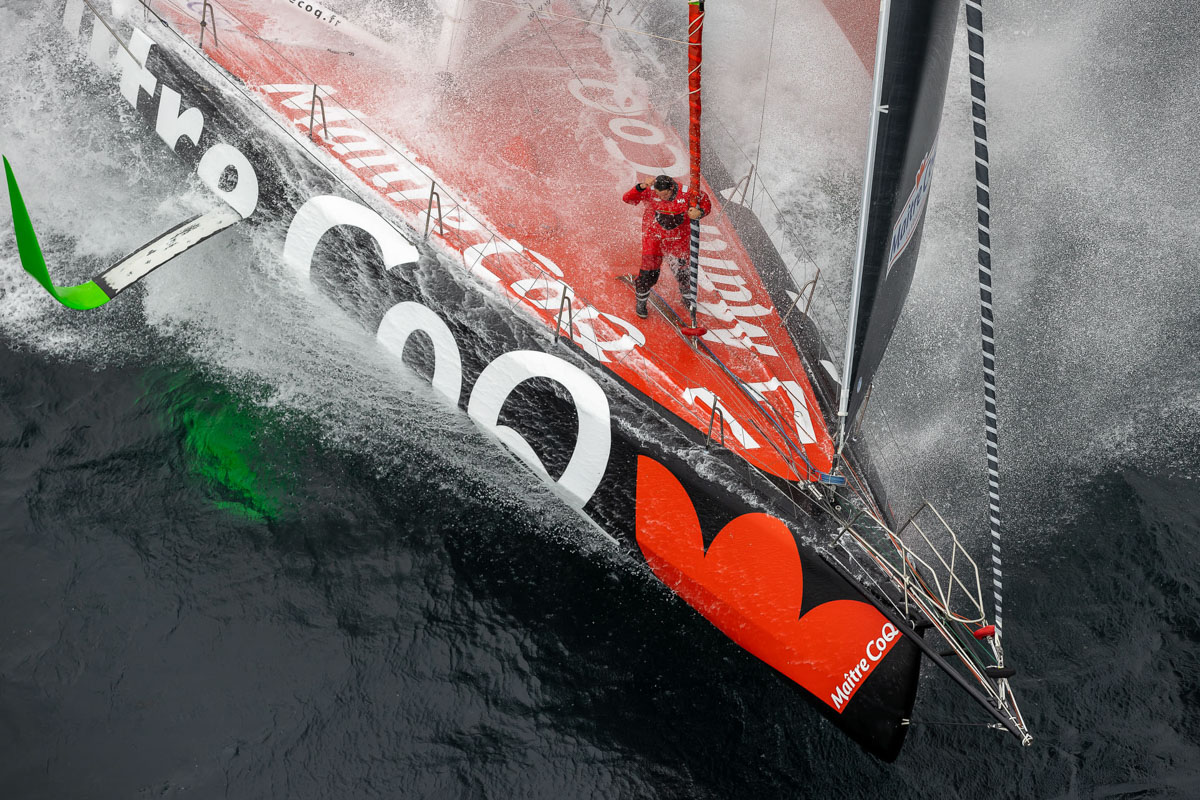 Having lost his mast before leaving the Bay of Biscay in 2008 in his first Vendee Globe, Yannick has waited until he could put the right project together to go again and produce a performance he was confident he could deliver. Not a race favourite before the start, Yannick, I am sure has surprised a few people. His boat was the former ‘Safran’ in 2016 with skipper Morgan Lagraviere who had to retire from the race whilst in 4th place with a broken rudder after just 18 days. He clearly has confidence in the boat and his own performance but is he still able to fulfil his full potential in these last few days?

Another skipper that was not a race favourite before the start of the race and I feel was probably overlooked by the media excitement in the build-up was Louis Burton. He has been the real surprise performer out on the water this race and is in striking distance for the top sport in a few days’ time.

He is now up to second, starting to see his westerly route pay a dividend. He has negotiated the western side of the high pressure zone quickest and into the weekend should see his gains continue, sailing faster and back on a more direct route. He has a narrow band of breeze to work but his position, some 70 miles north of the latitude of Charlie Dalin/Apivia, right now looks like he might overhaul Dalin when they converge near the Azores.

It is Louis Burton’s 3rd Vendee Globe, his first attempt was unsuccessful when he retired in the 2012 edition due to a collision with a fishing boat damaging his port shroud and threatening the integrity of his mast. He then returned in 2016 and finished in a respectable 7th place which was impressive as he sailed an older and heavier IMOCA. At the end of that race, with his continuing sponsorship from Bureau Vallee, he purchased the winner of the 2016 edition, the former Banque Populaire VIII, that he is now racing today. 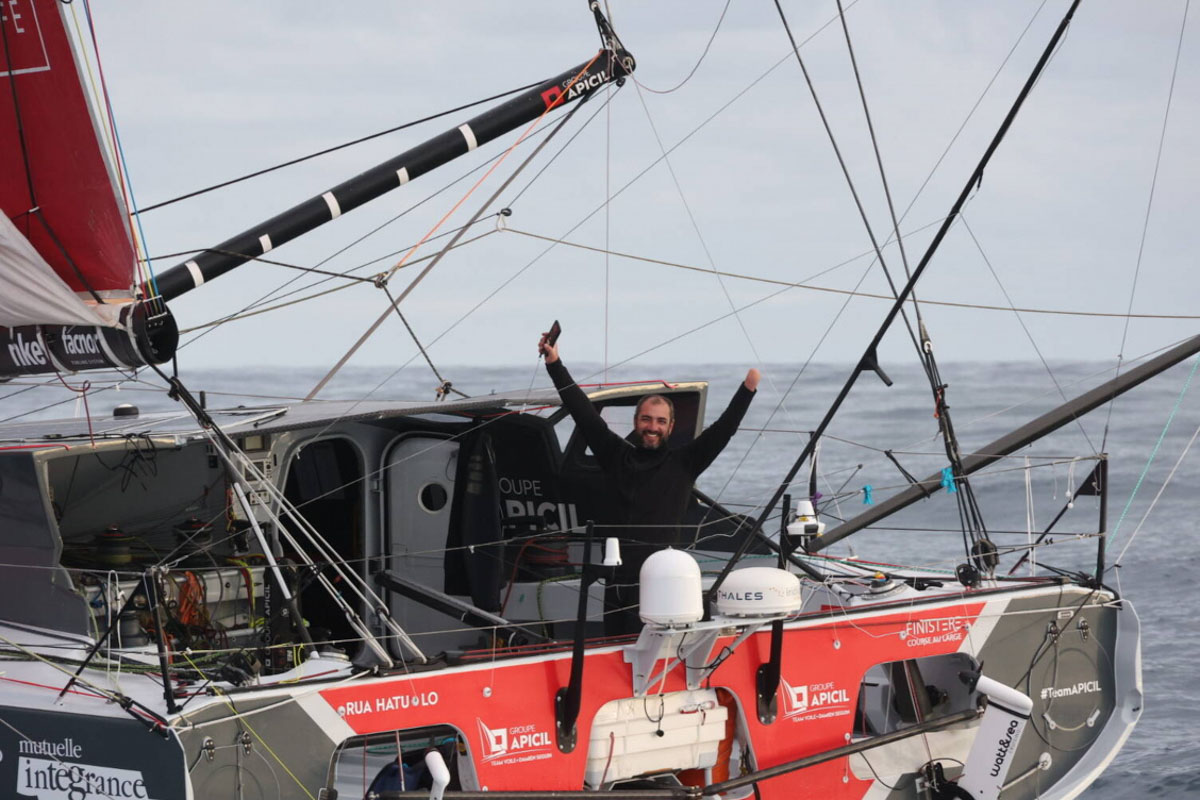 Based in St Malo, this sailor has been quiet in the build up to this Vendee Globe, choosing to do his training alone rather than line up against the competition. There were no big upgrades on his boat, but he spent time getting to know the boat and understand its performance. He was noticed on start day when he jumped the gun by seconds and was deemed over the line early for the start of the race.

This incurred a penalty of 5 hours which had to be taken before 38°N in which the boat had to stop for that total time before moving on. He then sailed an aggressive course in the South Atlantic and continuing into the Southern Ocean skirting the edge of the ice limit positioning himself in stronger winds and bigger waves but sailing a shorter distance than the others. With this trajectory, Burton managed to position himself to the front of the fleet and just on the podium.

Married into a sailing dynasty

Louis thought he was facing disaster when he began to have a few issues that very quickly escalated to being potential race stopping issues. He suffered with multiple crash gybes due to a malfunctioning autopilot which potentially contributed to some damage to his mainsail track forcing the sailor to race with the second reef in. It was as he passed Macquerie Island, a UNESCO World Heritage Site halfway between New Zealand and the Antarctica peninsula that Louis Burton stopped his boat in the shelter to make his repairs. He was not permitted to anchor but the island offered shelter and after multiple mast climbs, he was successful.

At a cost of just short of a day in time Burton re-joined the fleet a long way back from where he was before. He was 938 miles from the leader but did not lose heart. Able to push his boat once again at 100% it took just 23 days to return to the front of the pack once again. Now we are watching to see if he has what it takes to position his boat at the front of the pack when they cross the line. 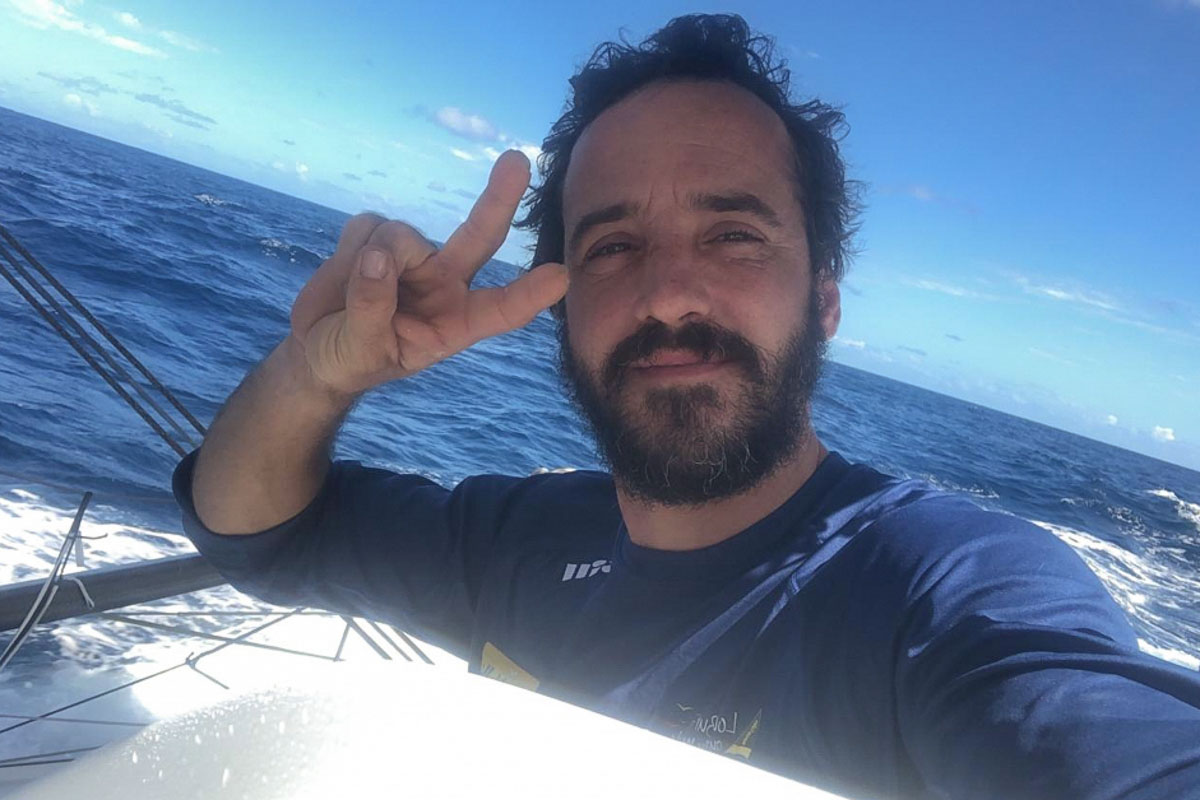 Regardless of the result, his race full of setbacks and comebacks has been impressive. A performance to be noticed and applauded. His wife and campaign manager and renowned solo sailor in her own right, Servanne Escoffier must be super proud. Servanne and Kevin Escoffier, skipper of the ill fated PRB, who was rescued this race by Jean Le Cam, are cousins. Better known is probably Franck-Yves Escoffier (Kevin’s father, Servanne’s uncle) winner of multiple Transat Jacques Vabre races and Route de Rhum races on a Multi 50. This is the family Louis Burton is part of by marriage, and now has delivered his own fairy-tale sailing race adding to the dinner table conversations. 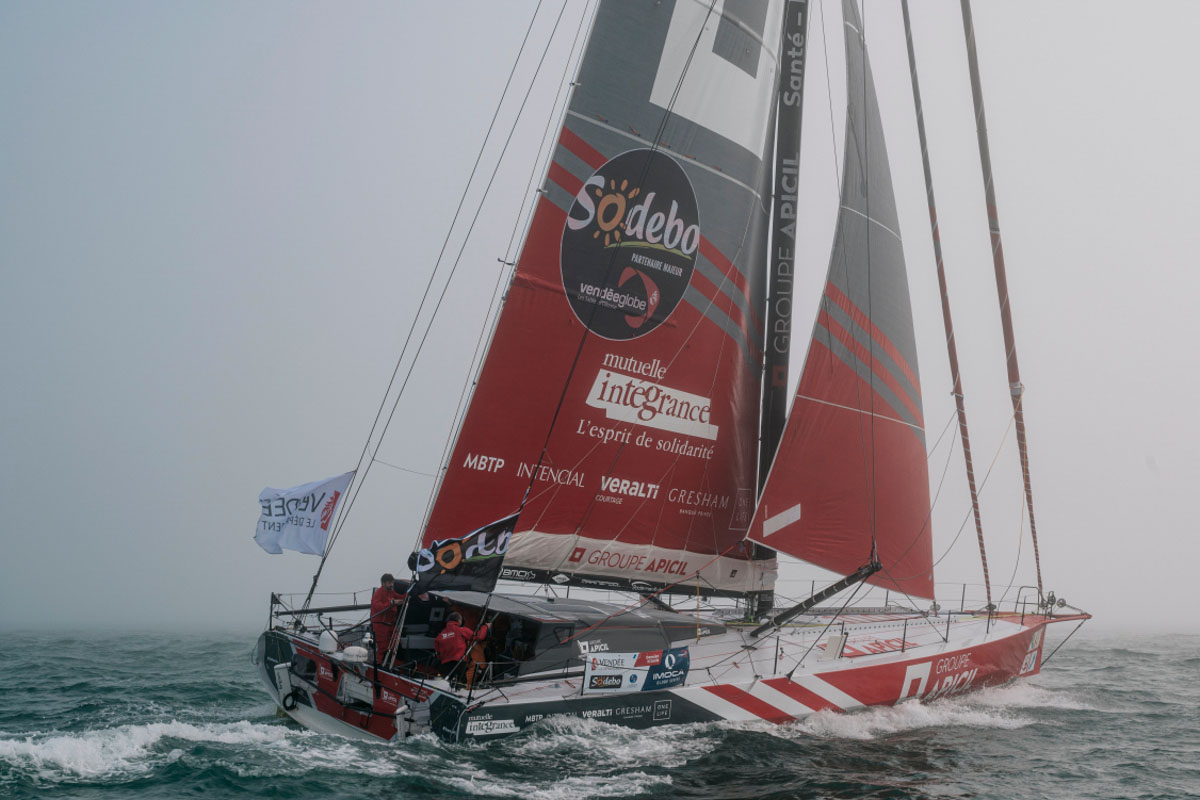 Others worth watching in this front pack are Damien Seguin, the only non foiling boat positioned in the leading top six places fighting to stay in the running for these final miles. We know he is a great sailor, winning multiple Olympic medals and World Championships, but that is in a dinghy in a race that last for twenty to thirty minutes at a time. I am not surprised by his performance as a sailor but to take on the Vendee Globe literally single handed is impressive.

Damien was born without his left hand, something he does not see as a handicap and he has displayed to us in this race that indeed there is nothing that can stop his world class performance. He is racing a 2008 boat that was the former DCNS, a sistership to the 2007 Hugo Boss. This boat was dismasted in the 2008 race, skippered by Marc Thiercelin and then raced again with Eric Bellion in 2016. It is probably better known as the boat used to make the film, ‘En Solitaire’ in 2012. 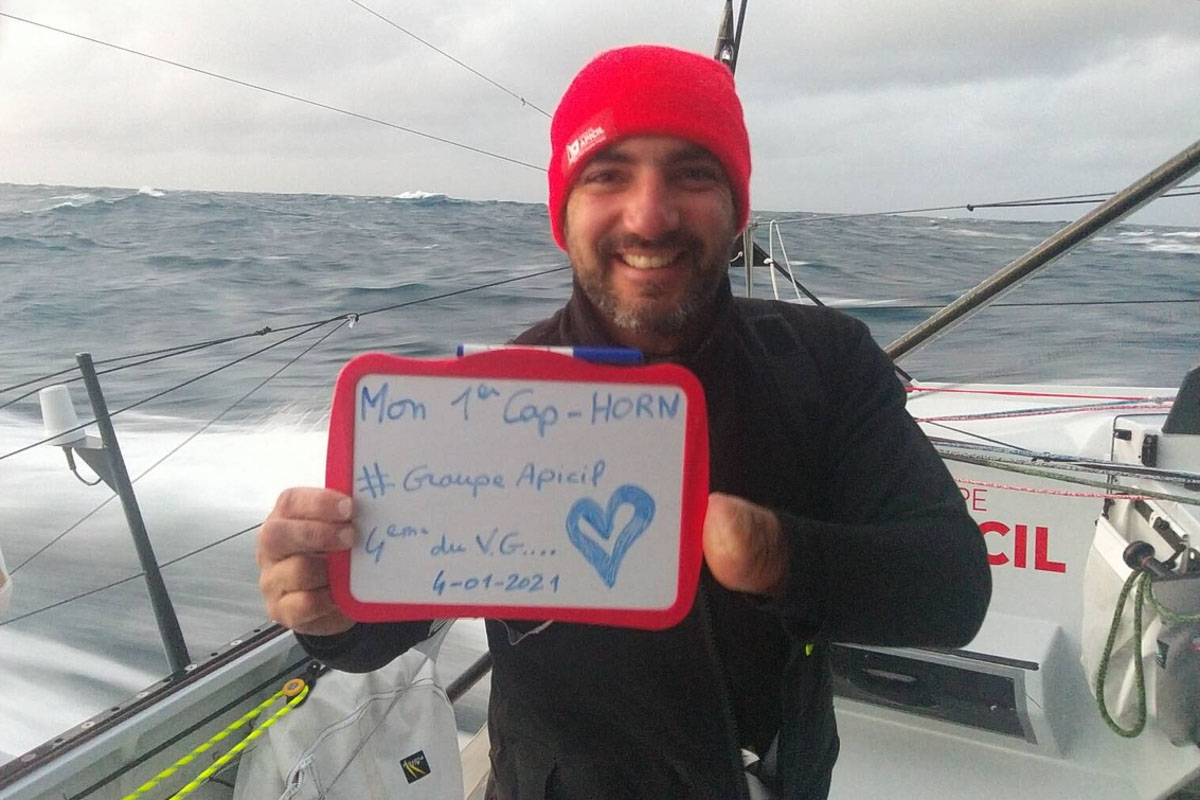 Damien worked with Jean Le Cam in modifying his boat and preparing his boat for this race and throughout the course the two have never been far apart, but it is now, in these latter stages of the race, that Damien has found an extra gear and is making the most of it keeping pace with the others just hanging onto the edge of the podium places.

Boris Herrmann, who was 2nd for the last days and is doing a phantastic race reported yesterday evening: „We have found ourself some good breeze in the high pressure ridge, sometimes we have been up to 22 knots. Right now I have flat seas and dream conditions. I think Louis Burton has a fantastic option there to the north. There is still plenty of way ahead of us and this is still not the right moment to discuss.“ 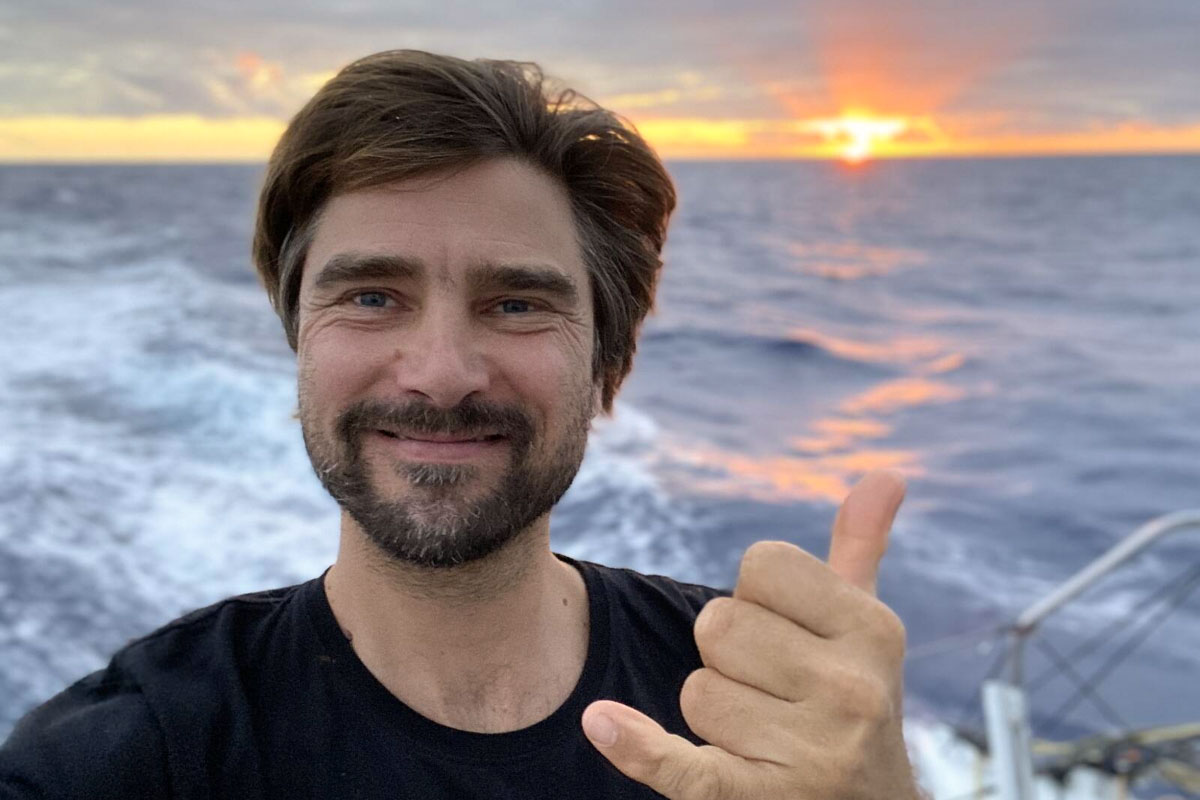 The first to finish this Vendee Globe will not only be the winner of the race but also the winner of the closest fought ocean battle ever seen on a global stage. We have said it before, but this edition of the race is unprecedented. It has been the most wonderful distraction and motivation to follow as a spectator. The sailors from first place to last place, those who retired and stopped and those that retired and set sail again have been truly inspirational and a shining beacon of light of all that is great about our sport. 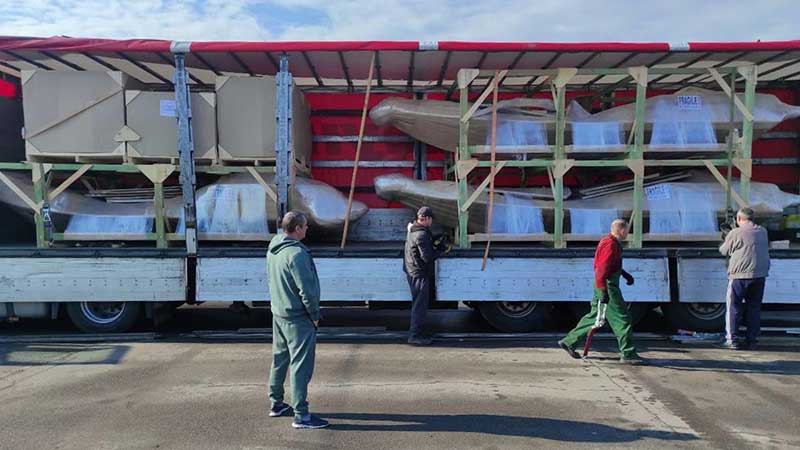 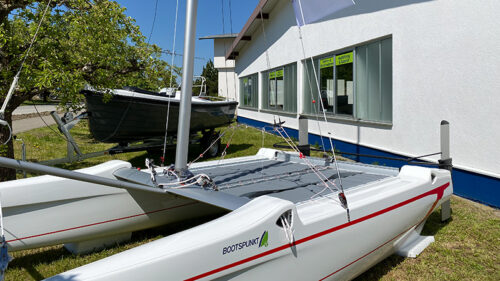