Around 9.30 a.m. Corrie is worried for the first time. The experienced skipper notices that the boat is taking on an unusual motion. Suddenly waves up to 4 meters high are coming from two directions, on the bow and the beam, says Corrie. And then it is suddenly very quiet. The wind is gone, as if turned off with a switch. Only the waves are still there, swirling Wilson Street around. Corrie suspects what is to come. [read part 1 Nightmare on Wilson Street] Immediately he reefs the sails to towel size and then the first hurricane gust sweeps over the boat.

Within minutes, the waves have built up to five-meter-high towers, coming from all sides. On the crest of the wave, the storm presses Wilson Street onto its side. There is no wind in the wave valley, the sails are flapping. It becomes impossible to hold the boat on course. Corrie starts the engine to bring the boat back under control. But the tank is almost empty. He struggles with the canister to refill diesel. But the wind atomizes the diesel before it reaches the nozzle.

The mixture spreads all over the boat, and lays a slippery film on the deck, wrapping Corrie and Jennifer in a cloud of stench. Maybe two or three liters have found their way into the tank, the rest is blown away. When the canister is almost empty, the storm tears it from Corrie’s hand. The anemometer now reads over 50 knots – wind force ten.

Within half an hour the sea has turned into a madhouse. Jennifer goes below deck and at about 10 o’clock she radioed the sea rescue in Malta. She does not make a distress call, in fact she does not know exactly what she wants. Maybe it’s just instinct telling her that it would be good if someone out there knew where they were. When the sea rescuers recorded the position of Wilson Street, they want to know what the situation is. Jennifer says: „We need diesel!“ Radio silence! After a short pause the voice reports again. „Are you sure your problem is diesel?“

Enormous weather front on the advance 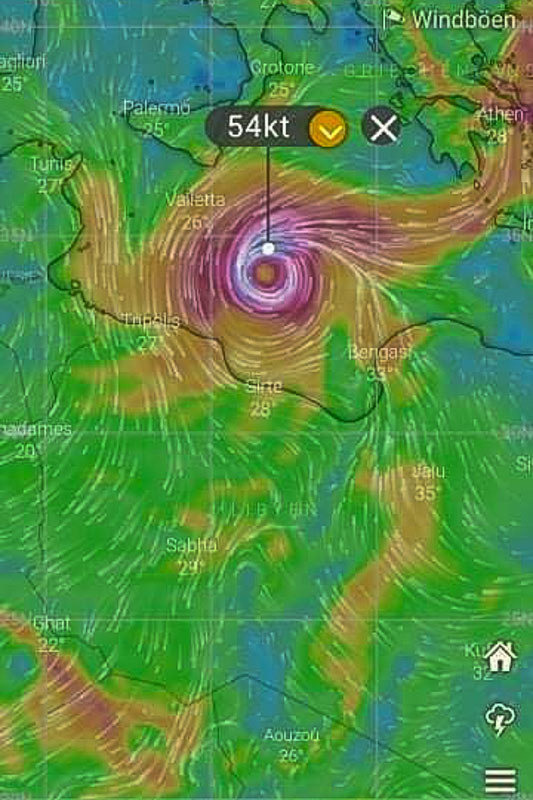 Unlike Corrie and Jennifer, the sea rescue workers see on the monitor what a huge weather front is rolling towards Wilson Street. Jennifer can’t remember exactly what happens next, only that she is suddenly in contact with two freighters that are coming to the rescue. Their boat is being tossed back and forth in the cross lakes. Below deck, Jennifer has trouble holding on to the VHF mike, on deck Corrie tries to regain control of the boat. But he can’t even tell where the wind is coming from. If Wilson Street is in a wave valley, he sees only huge walls of water around him. „We are getting help,“ Jennifer informs her husband. He just nods. Every minute the situation worsens, the gusts become increasingly violent and unpredictable.

„I had no idea how such a rescue would happen,“ says Corrie. So he launches the life raft they bought a year ago. But when the life raft falls into the water, what happens? Nothing! Like a hard-shell case, Wilson Street pulls the life raft cannister behind it on a 20-meter long line. Corrie still tries to hoist the life raft back on board, but he has no chance, the waves are too strong. „What a mess,“ he thinks. „If we drown now, we won’t be able to complain to the life raft manufacturer.“ Today he laughs about his strange thoughts in the emergency situation.

The Wilson Street drags the unopened life raft behind it © Private

Just under an hour passes before the 170-meter-long „Team Osprey“ emerges from the gray sea and lies upwind of Wilson Street to give it protection from the waves. A little later, the second ship also appears, an even larger cargo ship, which in turn provides the tanker with a wind break. The Australian’s boat now lies almost in calm water. Only the swell regularly raises and lowers the boat by four meters.

With a loud bang the crew of the tanker fires a line at Wilson Street. But the line gets caught in the mast. „Just don’t pull it now,“ Corrie thinks. Then there’s another bang. The second shot lands in the water. „Who is standing there at the gun?“ Jennifer says to Corrie – and laughs. Gallows humor in a dramatic situation.

The third shot must be right

What the two don’t know: The third shot must be right. Otherwise the maneuver must be aborted. The captain tells them that later. Also, the time window for the rescue becomes smaller and smaller. In a few minutes the wind will increase to over 80 knots. „The funny thing,“ Jennifer says later, „we were never really afraid. We were focused on our work the whole time, there was no time for panic.“

The third shot takes. The line lands in front of the sprayhood. Corrie grabs the rope, pulls and pulls. The thin line turns into a thicker one, then an even thicker one, until he pulls a 25 millimeter monster on deck, stiff from salt water, hardly bendable and too thick for the cleats. Only with difficulty can he lay the rope around the winch.