British competitor, Miranda Merron is racing on her Imoca named Campagne de France. This is her first Vendee Globe, but she is no stranger to racing around the world. In 1998 Miranda, alongside fellow British sailor Samantha Davies, joined the team of „Royal Sun Alliance“ led by Tracy Edwards on a Jules Verne attempt. Sadly, their efforts were thwarted when they dismasted off New Zealand after 43 days.

Originally this venture was to be a break from being an advertising executive, but Miranda never returned. A graduate from Cambridge University in Oriental Studies and Japanese, Miranda speaks five languages but has spent the last 22 years since that Jules Verne Attempt in ’98 professional sailing and racing in predominantly solo and double handed races. 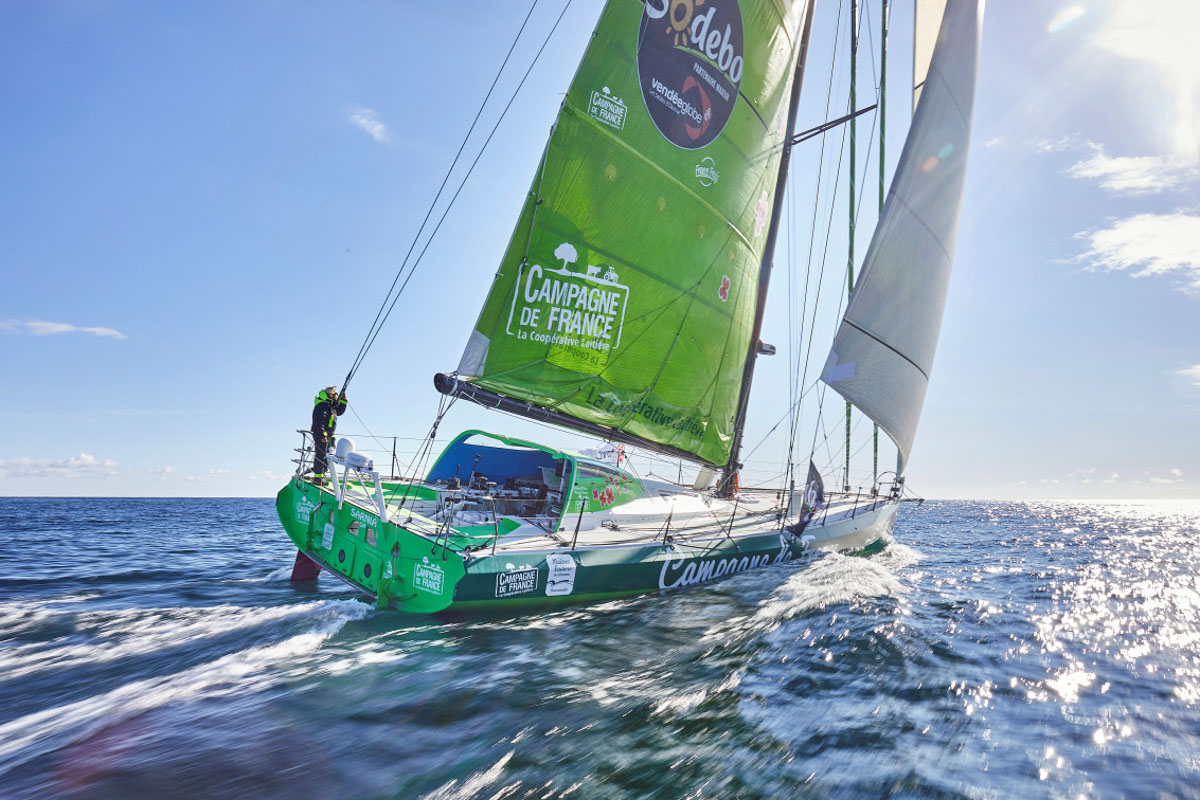 Her boat was built in 2006 from an Owen Clarke design in New Zealand at Southern Ocean Marine. Originally this boat was for Swiss sailor, Dominique Wavre, where he did a Vendee Globe in 2008 and two Barcelona World Races, before ownership went to US Skipper Rich Wilson when he raced in the 2016 Vendee Globe Race finishing in 13th place, aged 66 years old and the oldest competitor in the race.

The journey for Miranda to get to the Vendee Globe has been a long one. Her experience and success have been built up over time racing fully crewed, double handed and solo. She has experience from The Ocean Race, the Global Ocean Race, high latitudes sailing, Class 40 races and Imoca races. Now she gets to put it all into practise on her Vendee Globe. She genuinely loves being out at sea and knowing that her partner Halvard is at the end of the phone to assist and support her is greatly reassuring. 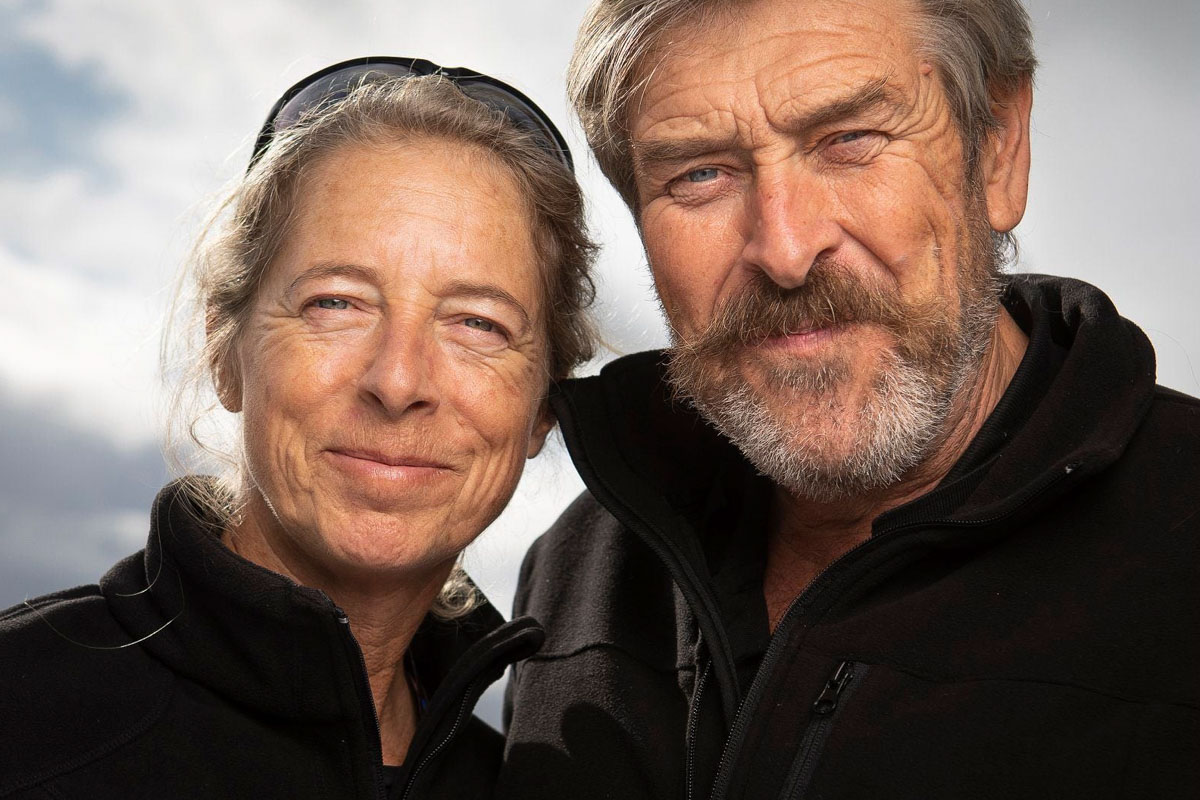 Miranda’s aim for the race is to finish but she would like to beat Dominic’s time of 90 days and Rich Wilson’s time of 104 days. Her competition will be predominantly with the older boats of Pip Hare on Medallia, Alexis Barrier on TSE 4 my planet and Ari Huusela on Stark. But there is little Miranda has not seen or experienced so nothing will really phase her, and this is the Vendee Globe so anything can happen. 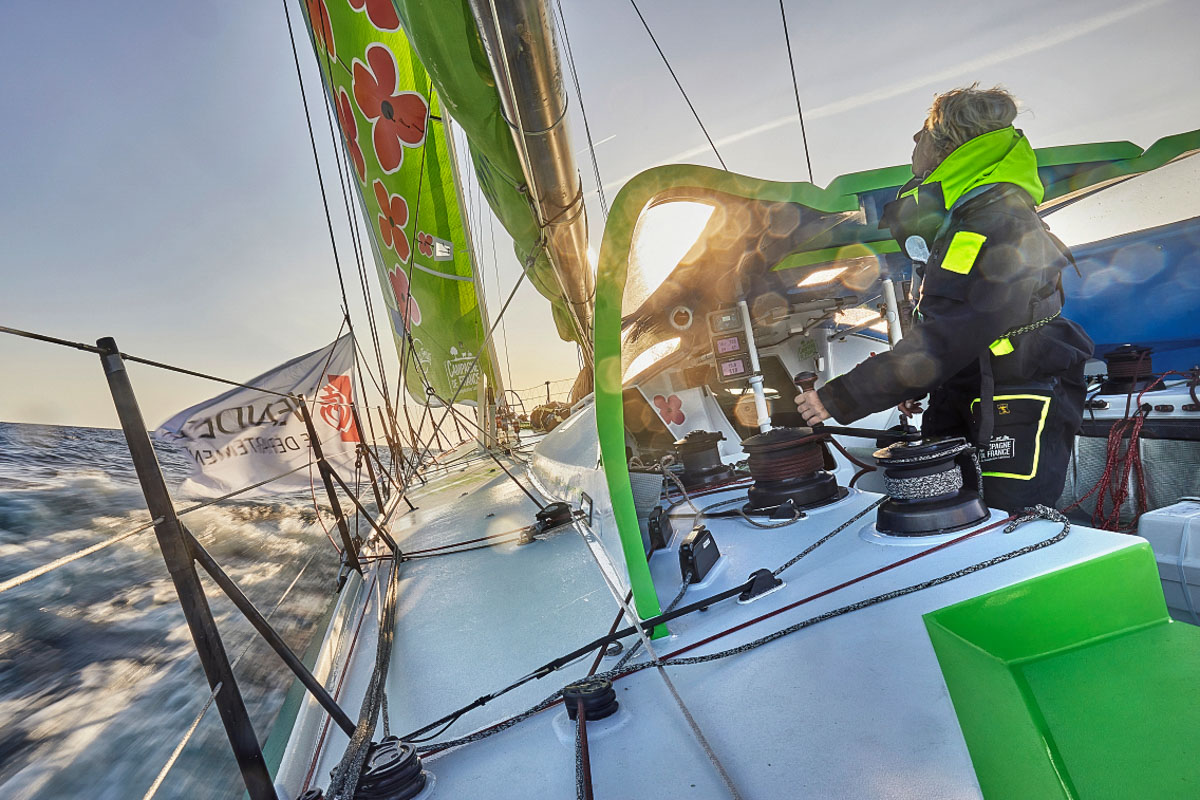 Miranda took ownership of this boat and has worked on the refit and modifications in the yard her partner Halvard Mabire owns. Most of the work has been carried out by themselves with the help of volunteers from time to time. It has been hard work but there is not an inch of boat Miranda does not know.

Her sponsors of „Campagne de France“ and Region de Normandie have been on this journey with the team for a while too. The relationship has developed from their Class 40 through to the IMOCA and now a Vendee Globe dream. Their aim from this relationship is to enhance their reputation and awareness of being recognized as the brand that gives meaning to French agriculture, by bringing producers and consumers together, using their pharse of: „From pitchfork to fork!“ 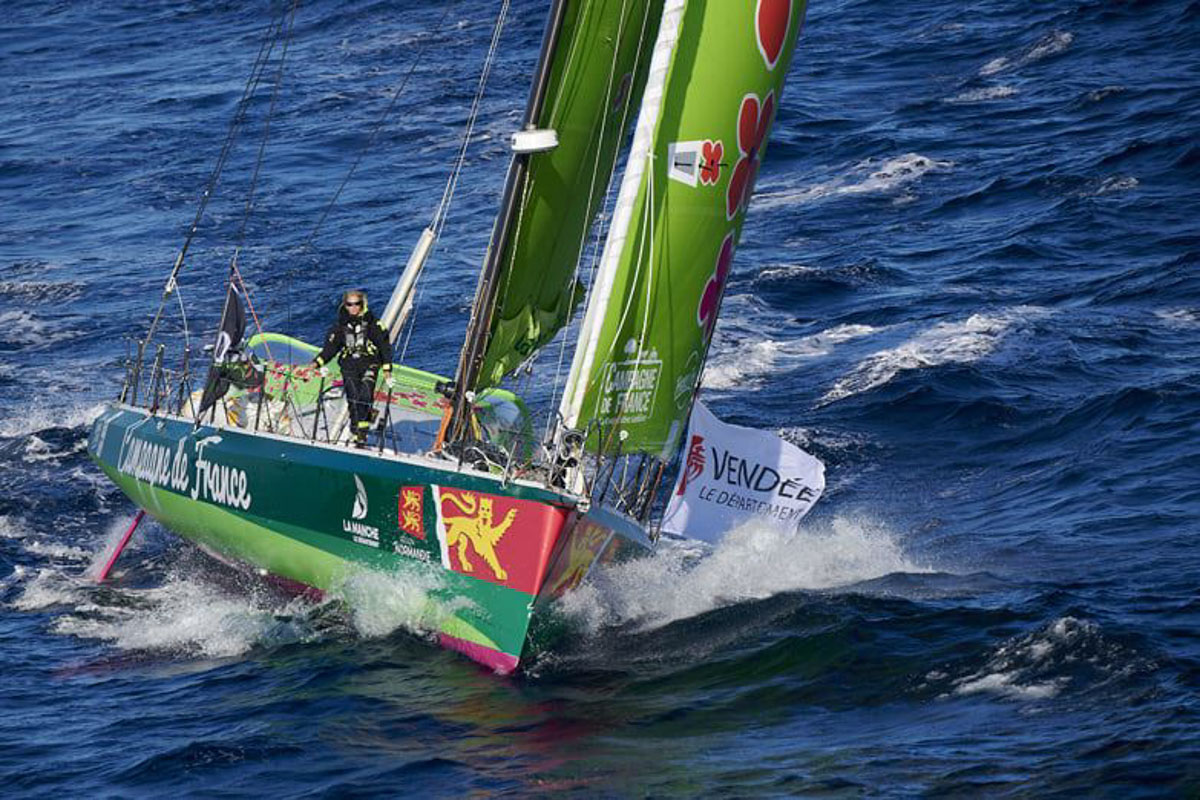 As an individual, Miranda is strong willed and determined. But the draw of the sea allows her to relish in her more romantic side. She embraces nature and the power of the wind and waves and works with the forces to get the best from her and her boat. Miranda is great at seeing the big picture and making sure the long-term plan is just right.

I have had several chances to sail with Miranda in the past. When I took ownership of my first IMOCA 60, the original Team Group 4 for Mike Golding, then Motorola for Conrad Humphries, back in 2007, I sailed with Miranda to help me learn how to sail the boat. We did several trips around the Isle of Wight as you need to sail on every point of sail when you do and so it is great practise. She showed me tricks to make my life easier and how to go about sail changes solo. 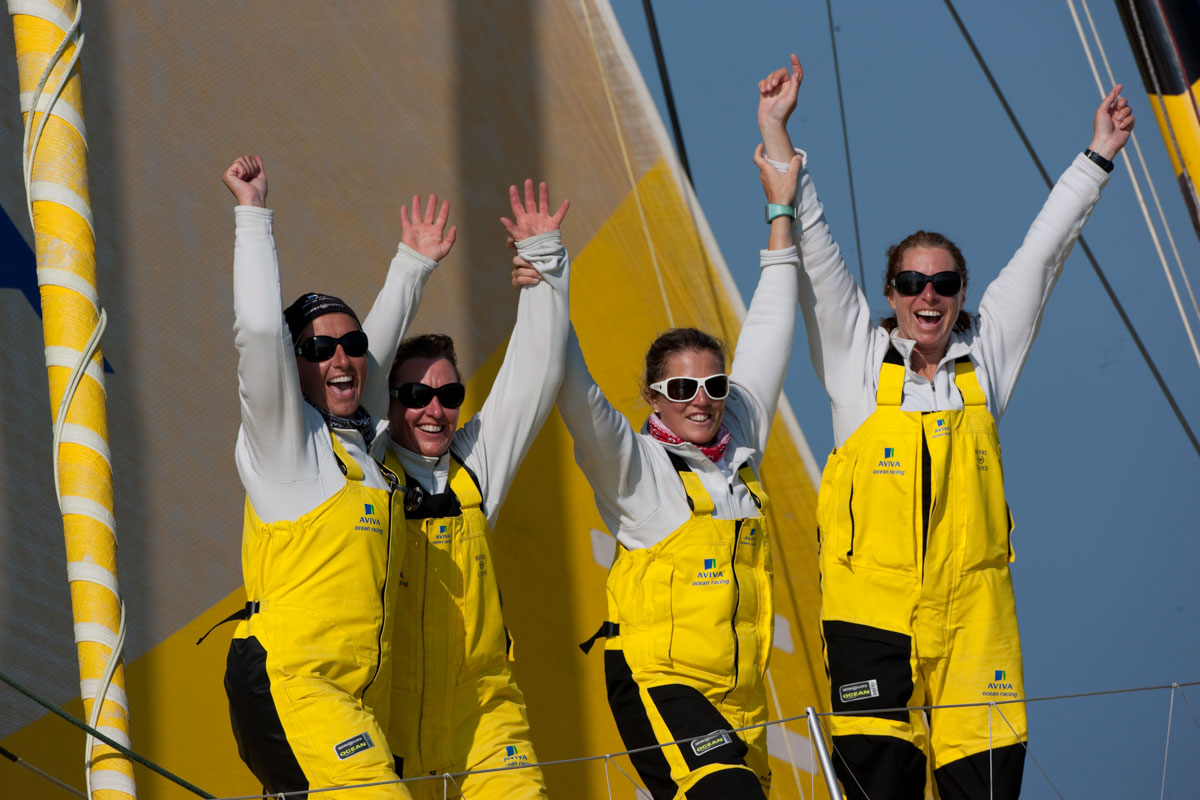 Dee Caffari and her all female crew of Sam Davies, Miranda Merron and Alex Sizer, aboard Aviva © Lloyd Images

A few years later in June 2009 after the finish of my Vendee Globe we set out together again, joined by Samantha Davies and Alex Sizer to set a record for sailing Round Britain and Ireland. We managed to take 16 hours off the record that time and it was some of the best and most enjoyable sailing I have done. It was a great team with one focus, and we all worked together pulling on each other’s strengths and having each other’s backs. A lot of fun and success was achieved.

To date the Vendee Globe has not been smooth sailing for Miranda. She has overcome some electronic issues with her pilot and has more recently dealt with a hydraulic issue in a keel ram. Guided through the process of fixing the problems by communications with Halvard, they have succeeded in overcoming the issues despite these areas being an admitted weakness for Miranda. 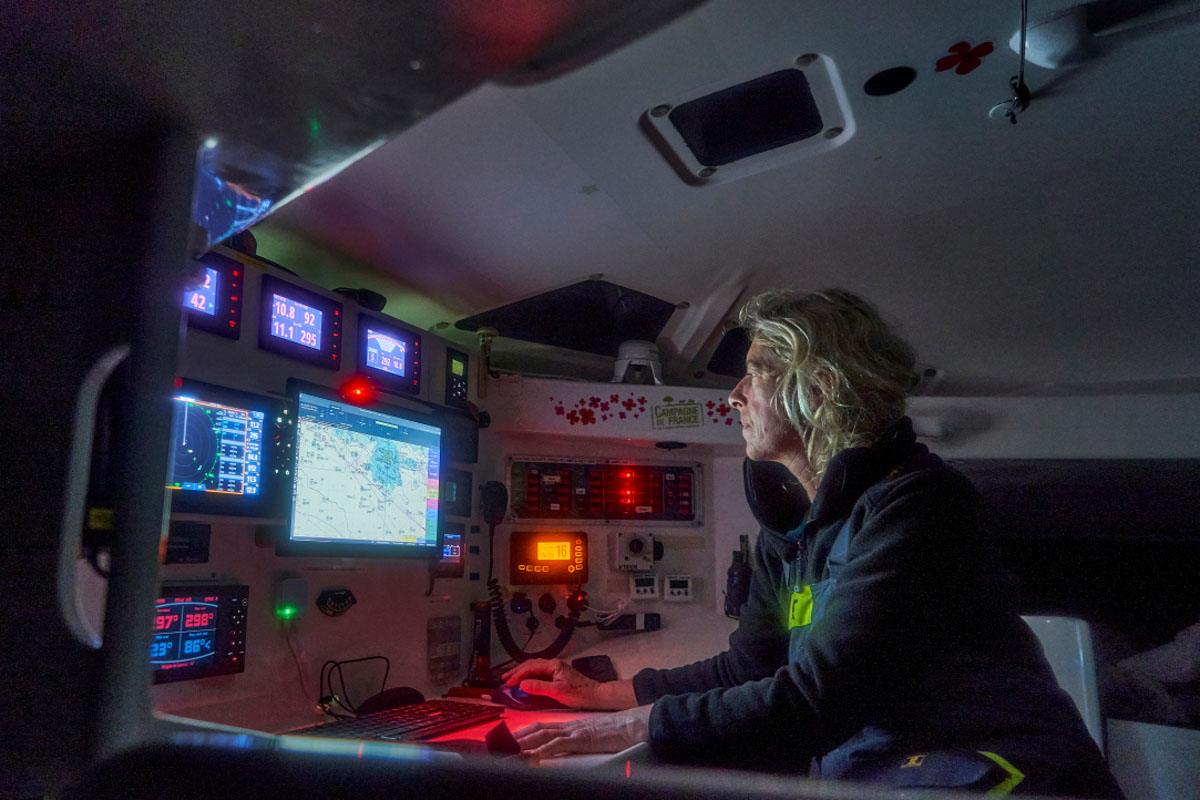 She has battled the high-pressure systems that led to a wide doldrum zone to cross in comparison to the boats ahead of her. She has hung onto her group closing in on her battle with Alexia Barrier on TSE 4 my Planet. Now she has started to stretch her legs down the South Atlantic and is looking ahead at a low pressure that will help her close in on the boats ahead that are suffering lighter winds as she aims for the Cape of Good Hope. The temperatures are dropping, and Miranda is seeing Albatross and knows what is in store for her in the Great Southern Ocean.

Miranda has always shared her passion willingly and now we can all enjoy her voyage around the world together.

This video made the 2nd place in the Mirabaud Sailing Video Award. 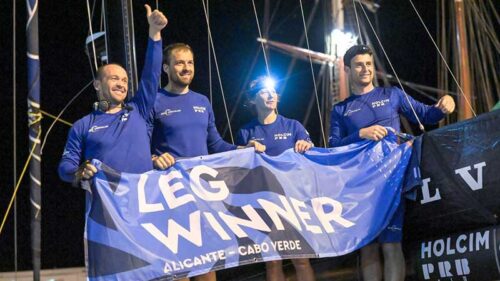