The Atlantic Rally for Cruisers (ARC) is a well-known name among sailors: for many large and small charterers, the necessary transfer of their territory from their summer yachts to the wintry Caribbean is for many amateurs the easy entry into cruising. An Atlantic crossing is hardly easier to accomplish, in principle everything is organized, you just have to hire.

But whoever thinks that the ARC fleet with its more than a thousand sailors from 53 different countries has only one trip to go from Gran Canaria to St. Lucia in the Antilles Arch and only has to set sail to be driven by the trade wind, is wrong. By the way, if you understand german, you might want to read the german text version. 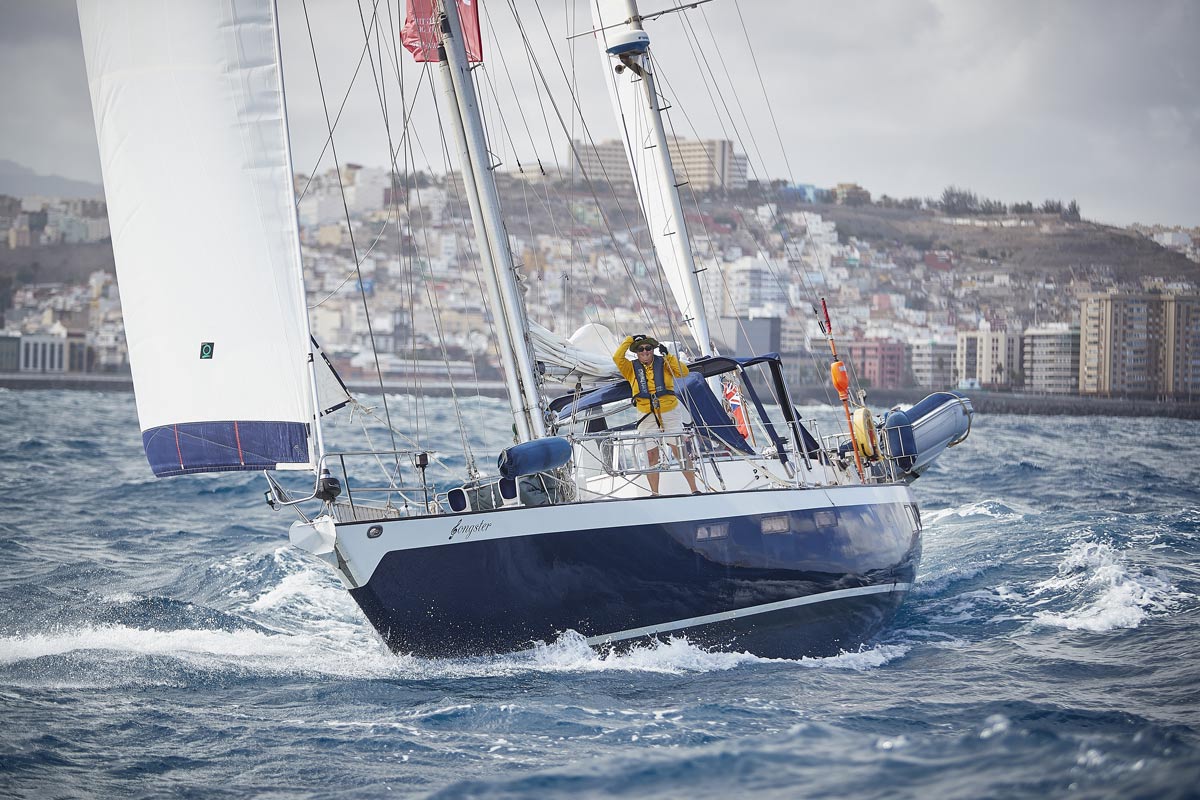 There are always disturbances

Certainly, there are many travel reports that seem to confirm the above expectations: The route is part of the so-called barefoot route, and with the end of hurricane period in early November, a more stable and secure. However, the last few years have repeatedly shown that disruptions can affect the actual trade wind field, which is expected from the start, because many books describe it, and can have a significant impact on the regatta field.

I have been watching the tracks since 2010 and analysed the respective weather conditions between start and finish. 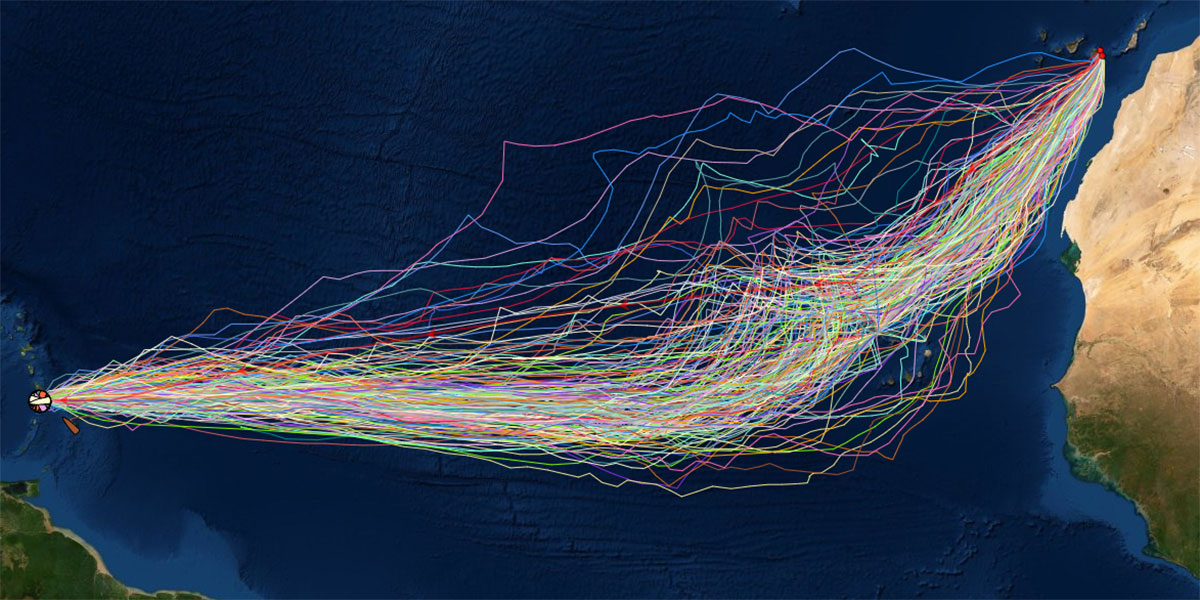 In 2010 the Trade winds was temporarily disturbed

In 2010, the weather conditions at the start were typical: the Azores high ensured a stable trade wind that gained strength with every mile to the south. The boats drove a bit lower course compared to the great circle, the shortest way.

But after about ten days, a strong Atlantic depression showed, which caused the high-pressure zone at 30°N messed up. The low wind zone was shifted strongly to the south; and with it the wind. In the tracker it is easy to see how almost the entire fleet is moving south in order to see wind. Then it went on with a stable Trade wind. 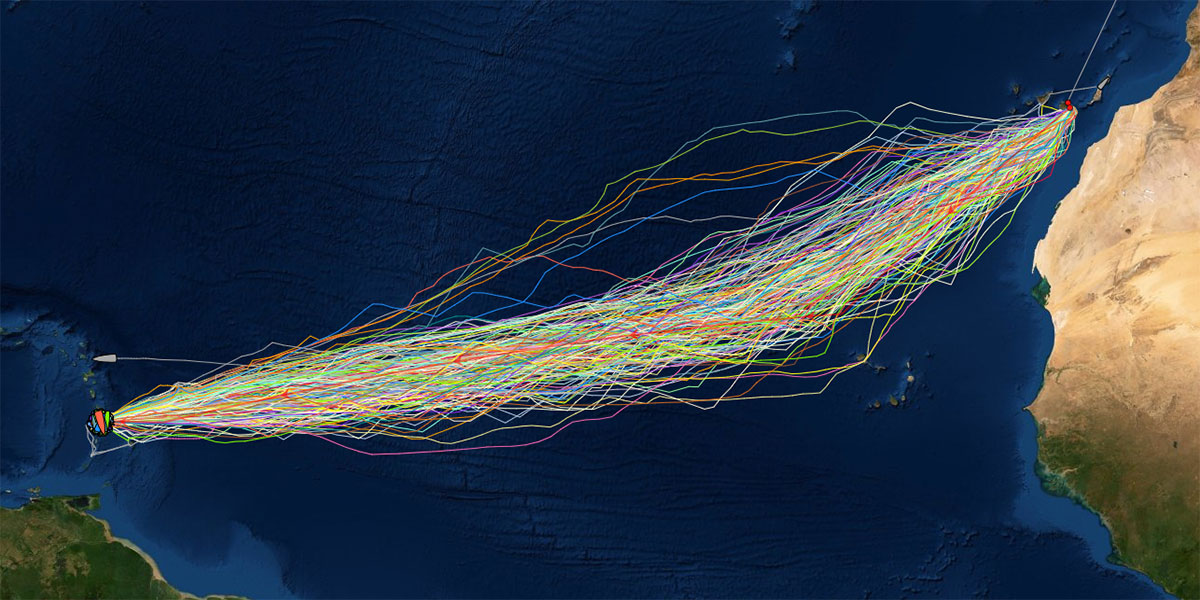 The better wind was in the south

2011 was a year of very constant trade winds, with no disturbances. However, here was the better wind to find a little further south, so that went down to a few, all on the way towards Cape Verde and at about 20°N 30°W to St. Lucia bent.

In 2012, there were initially no particularities in the general weather situation, but the Trade winds were not fully developed. Due to a small-scale low that extended from West Africa in the direction of the Canary Islands and the Atlantic Ocean. 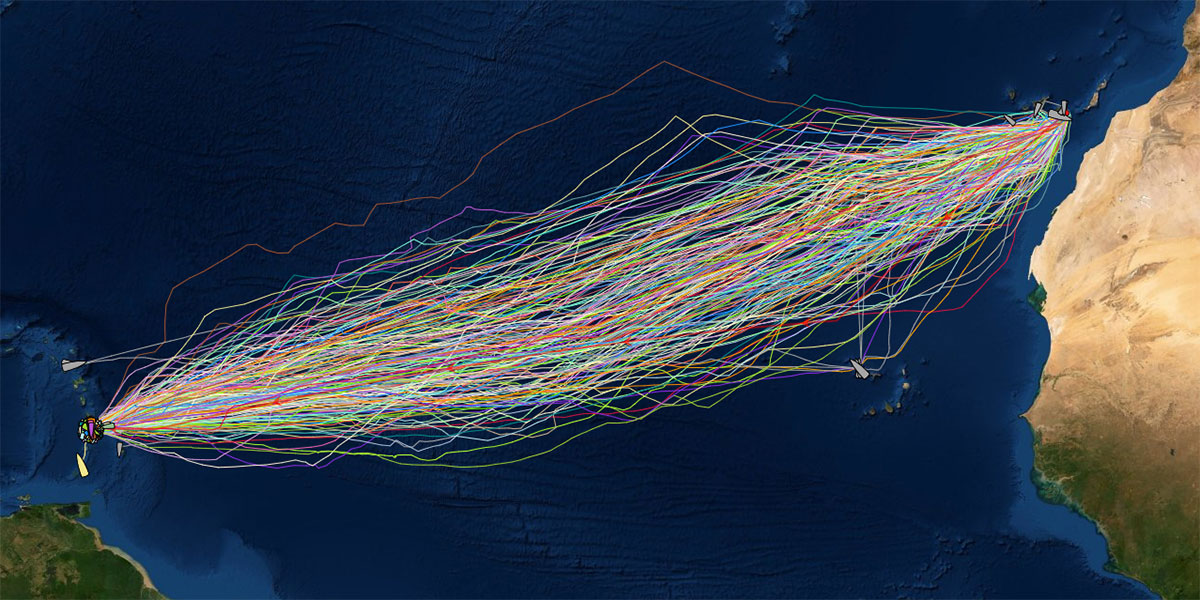 Thus, especially the fast boats drove a direct west course, isolated even in the northwest. So away from the goal. It was only when the low and its calm zone were resolved that the boats were able to set off towards the destination five days after the start with a better-built Trade wind.

A good long-term forecast was particularly important in 2013. At the start, the weather pattern shows an enormous north-south orientation. On the one hand from a low in the USA and further east also in the high. It extended to 30°N in east-west, but from 18°N over the Azores to Great Britain. 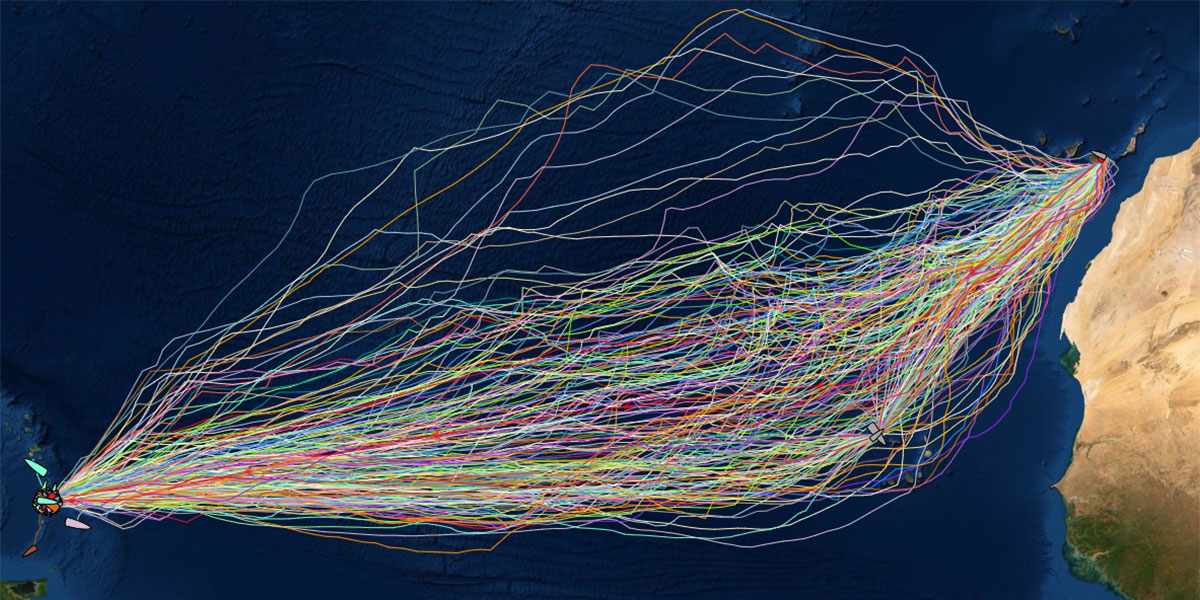 Due to the fact that this low wind zone was slowly moving eastwards, the Trade winds was largely absent. However, there was a small corridor used by the main field.

For them, it was once in the direction of Cape Verde, to go later from here with the slowly recovering Trade winds to the west.

Big arc through the north

A good handful of boats, on the other hand, used a small low with a core at 33°N 28°W in the days after the start to gain an advantage. They sailed in the north of the core with aft winds around the low and then looked for the transition to trade winds on the western edge of the low.

This big arc in the north should pay off, because this group was at the end in front of everyone else in St. Lucia. 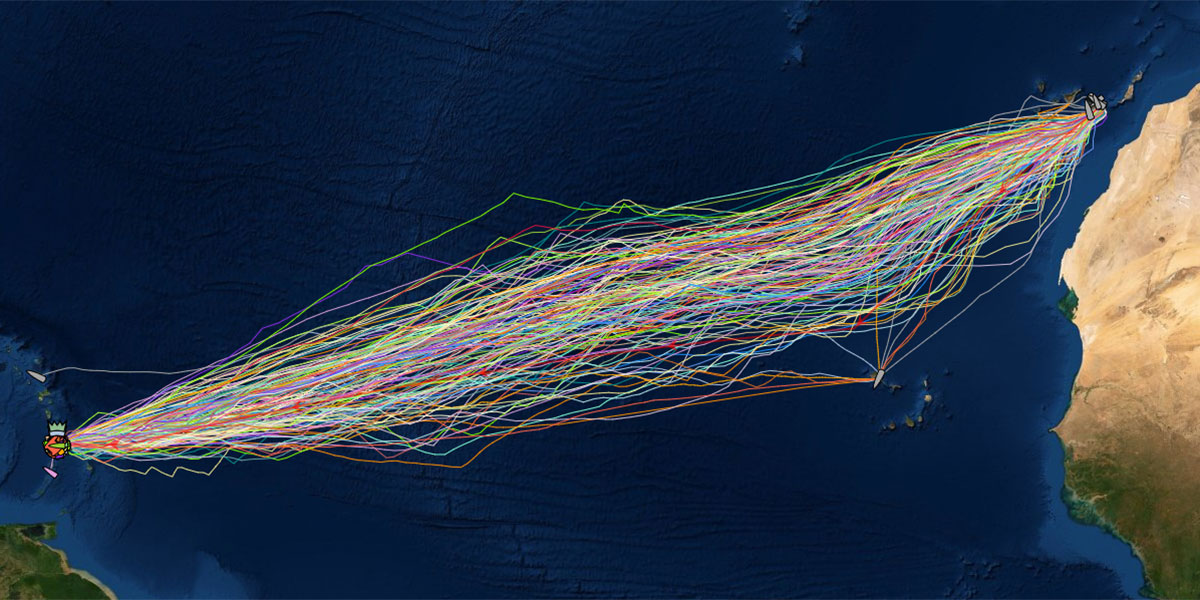 In 2014, there should be no surprise except for the victories of a Volvo 70 and a Farr 100 in the rest of the field. Especially not in the weather. The expected and hoped for classic trade wind situation occurs from start to finish.

In 2015 we started with good and stable winds, but after about four days at Cape Verde, a small depression was developed. The wind field collapsed here. Boats on the southern course suddenly had problems. Those who drove a little further north had to install a small north diverter to stay in the good wind. And all those who eventually drove north of the Great Circle course were in the lead. 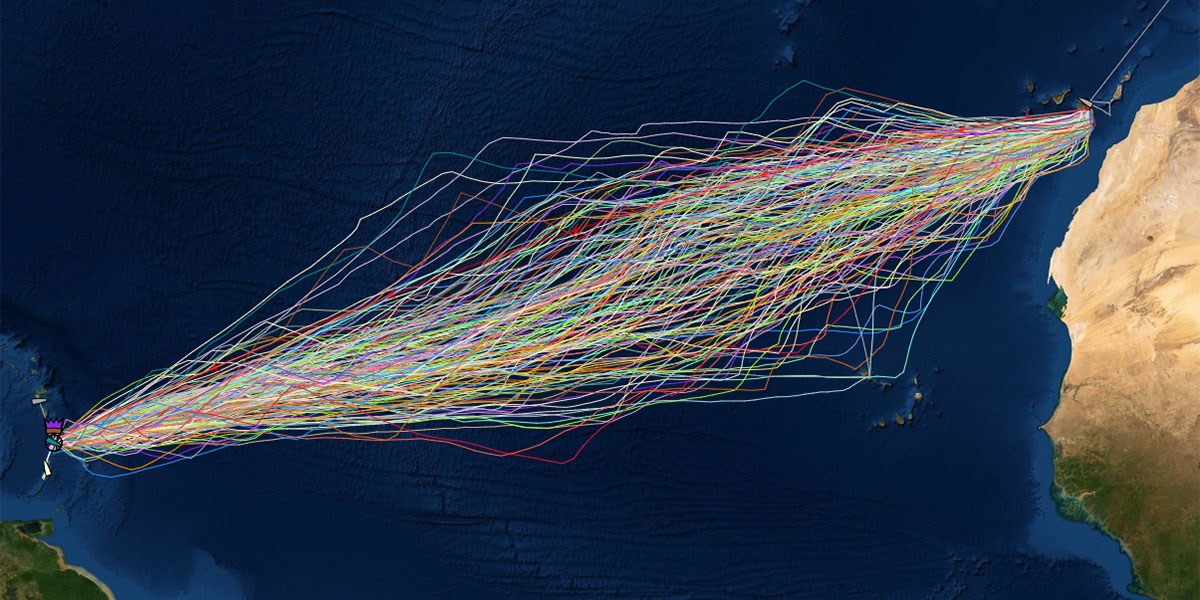 Low pressure trough in the middle of the way

2016 was a very special year. The weather was anything but easy, because in the middle of the track was a so-called low-pressure trough, that not wanted to move or dissolve from that place.
It was not only constantly showering and thunderstorms, but the wind field was anything but stable and sailable. 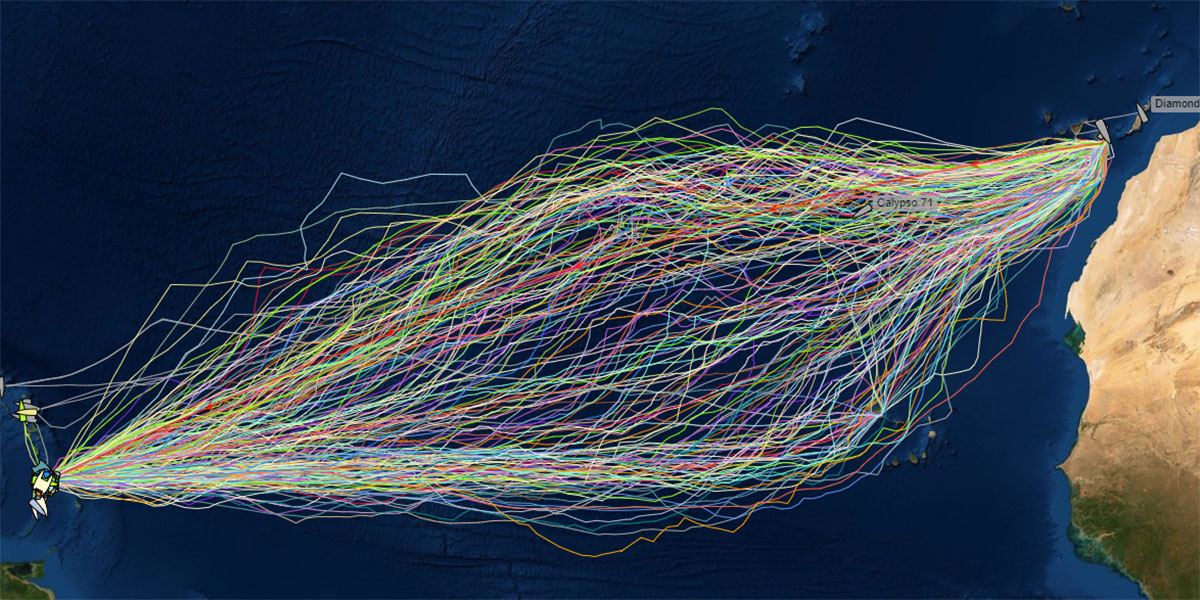 Only two way out

So basically, there were only two possibilities: 1. You make your way far south, in the hope that the trade wind will be there. Or you can sail far north, around this doldrum area. This resulted in a striking division of the field into two, with the northern route ultimately being the somewhat faster one.
However, there were also a few yachts that passed through. But the feedback shows that this daring will be punished with inconvenience. Missing wind and sometimes heavy weather hit the crews and the engine hours (allowed, but gives negative points) went up diligently. 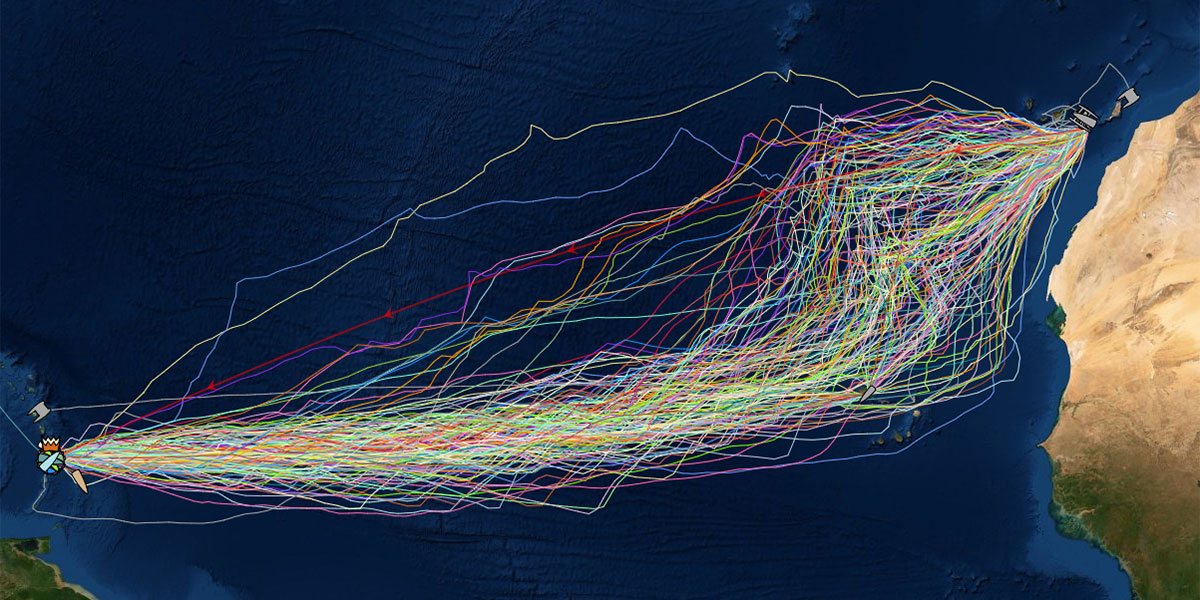 In 2017, the start of the regatta caused a storm for an extremely strong southward shift of the Azores and thus also the Trade winds. These only started at the level of the Cape Verde and extended only very slowly in the course of the race to the north again.

Thus, the “golden course” this year was that of Cape Verde: First, a small nozzle along the African coast had to be used to get into the Trade winds area.

Since in the long term the situation on the Atlantic would normalize again, the strategy was to find the stable winds as fast as possible in the south in order to go with you to St. Lucia and not have to use the engine as long as possible. In the end, this routing strategy helped a Hallberg Rassy 37 to overall victory. 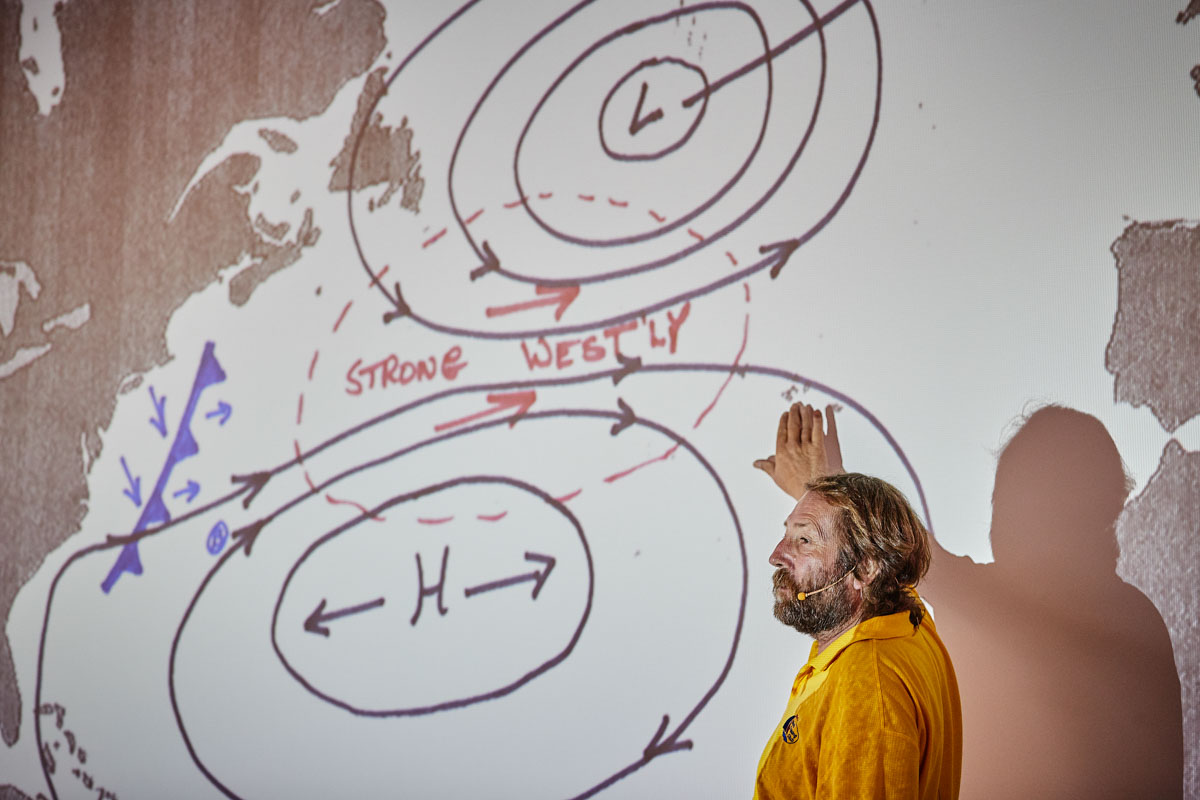 By contrast, 2018 was almost normal. It went with fairly stable conditions on a course that was exactly in the middle between Cape Verde and the great circle. Except for individual squalls, so local disturbances with gusts up to the 40 knots, which can appear however each year, remained surprises.
2019 started almost like 2017.

However, a low had already passed the Canary Islands a few days before the start, so that behind it there was high-pressure over the route. For a large part of the fleet, it was initially windy for a long time. 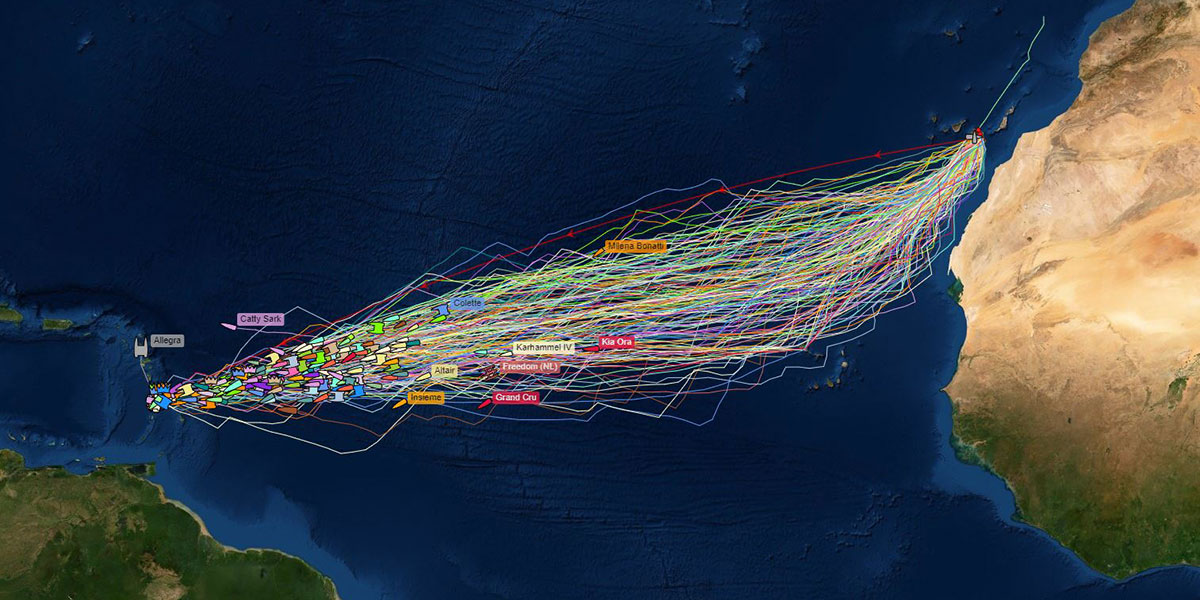 Royal way over the Cape Verde

Again, the royal way was initially for the Atlantic Rally for Cruisers on a direct route to Cape Verde to find the more stable wind there. But that was only for the fast boats. The slightly slower could draw no great benefit from the already after a week slowly rebuilding Trade winds.

Above all because the trade wind field was newly formed from two directions. Once from the still existing field at Cape Verde and then another trade wind field from the Canaries was added by a north shift of the Azores high. The boats in the longer doldrums had another advantage. To be on the shortest route and to see the new wind a little earlier from aft. 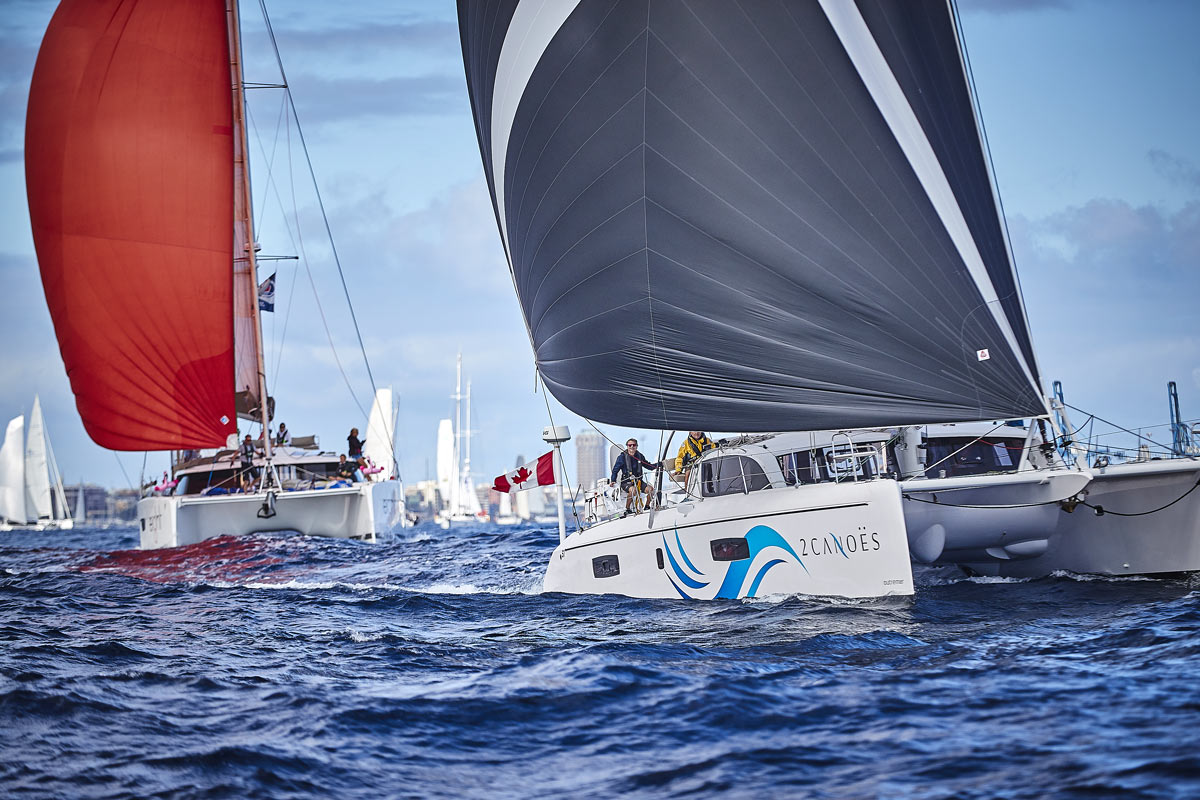 As you can see from this short analysis, each year is exciting again and often difficult in the forecast. Since the requested routings are first and foremost about safety, a correct tactic regarding the best wind only plays a subordinate role.

At the latest after the routing success with the Hallberg Rassy 37 in 2017, the possibility has also become quite cost-effective to be able to shop for routing in the WetterWelt in order to reach the front places in race.

However, one must also note that for most of the fleet the biggest challenge is yet to come: the way back to Europe!