A violent stretch of chaotic water, frequented by icebergs, huge waves and plagued by gale force winds. In fact, more people have ventured into Space then have sailed round Cape Horn successfully on their own, that puts things in perspective.

At some point along the Pacific Ocean between clearing New Zealand and rounding Cape Horn there is normally a monster depression to deal with. There will be storm force winds and huge waves to conquer and it almost as if the Southern Ocean is giving you its final farewell. You survive the final challenge, and you feel as if you have conquered the world.

The passage will not be the same for everyone but each of the sailors will have their own reference for the sting in the tail that the Southern Ocean delivered to them in this edition of the Vendee Globe. So far, we have seen a high pressure dominate the South Pacific, but do not let that fool you.

Yannick Bestaven is back in the Atlantic Ocean

This year, the passage around Cape Horn is expected to be the toughest a Vendée Globe leader has faced since many editions of the solo non-stop race around the world. Waves as high as a three-story building and winds gusting to 55 knots are expected over the next few hours for Yannick Bestaven and Charlie Dalin. Both are rounding the Horn, the last of the three major capes of the Vendée Globe, for the first time.

This afternoon, 48-year-old French skipper Yannick Bestaven on Maître Coq IV passed the Cape at 13:42 UTC and returned to the Atlantic from the Pacific with an estimated lead of more than 160 nautical miles over runner-up Charlie Dalin on Apivia. 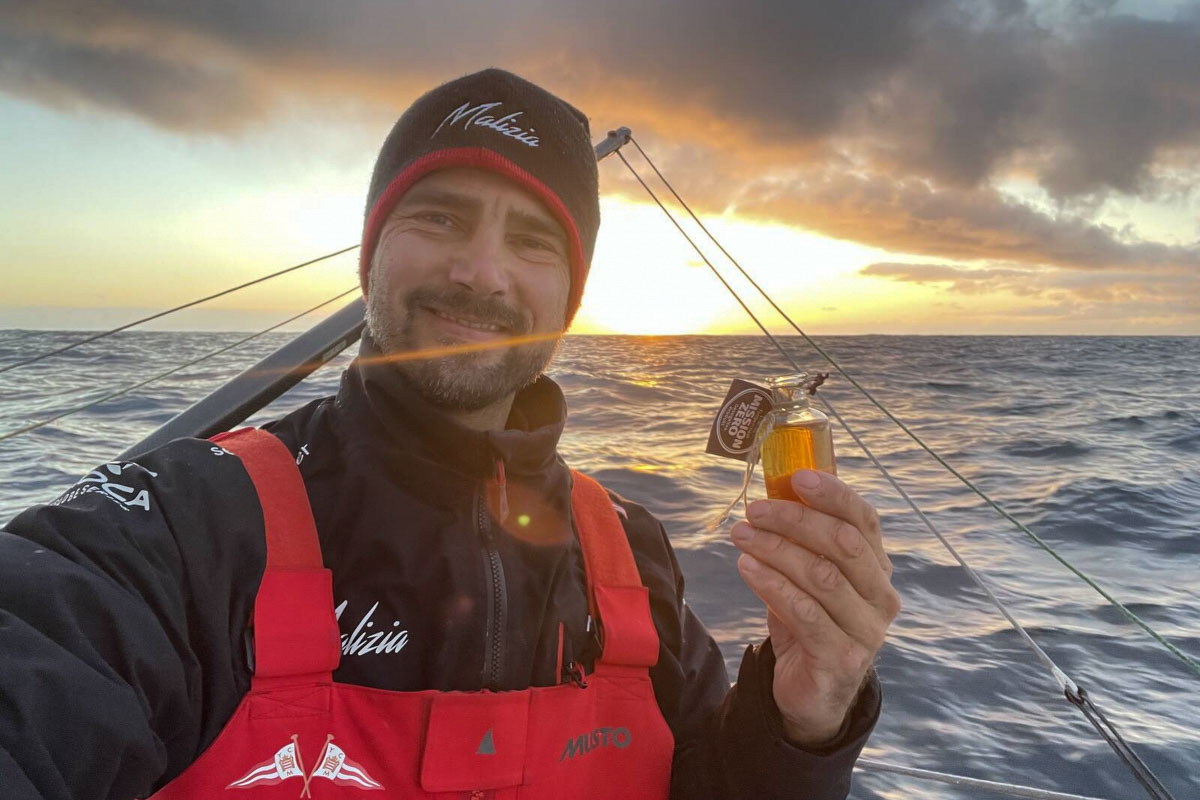 Hope for mercy of the spirits of the sea

“A sip for me, a sip for the boat, a sip for Neptune, hoping he will be lenient with us”, said Charlie Dalin, the runner-up, yesterday, celebrating his arrival in 2021. Boris Herrmann also gave himself and sea spirit Rasmus a sip to mark the new year.

This Saturday, a few miles from Cape Horn, Bestaven and Dalin very successfully pushed themselves well into the lead, ahead of their nearest challengers. This lead should allow them to slow down, get into survival mode, and be prepared for the worst of the vicious low pressure system that is expected to be most severe this afternoon. 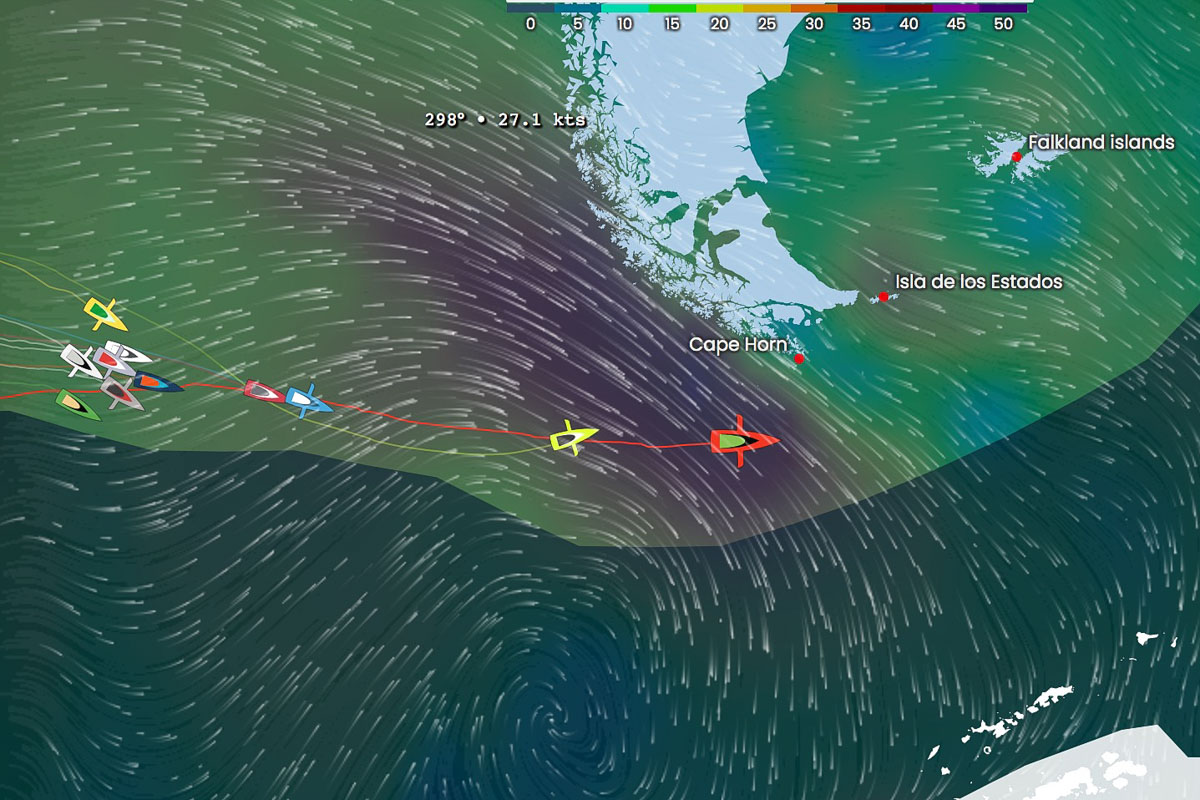 Led by the chase group, Ruyant is sailing behind the low, in an icy southwesterly wind current that accelerated the entire group yesterday on New Year’s Day. The pace is once again relentless, and the gaps between the boats in this group are tiny. Boris Herrmann is currently in sixth position, followed by Jean Le Cam.

Le Cam was rescued here at Cape Horn after capsizing during the 2008 Vendée Globe. It was Kevin Escoffier’s recently lost PRB boat that played the rescuing role in that Vendée Globe. The PRB skipper at the time, Vincent Riou, had rescued Jean Le Cam from distress after his keel broke and capsized.

A monster storm and nowhere to run

In 2008, I was sailing between Brian Thompson ahead of me and Arnaud Bossieres astern of me and we were watching a depression build behind us and it had us in its sights. As we closed Cape Horn and our gateway marking our return to the South Atlantic and our passage north returning to Les Sables D’Olonne, we were destined to meet this depression at the same time. It was the ultimate meeting of fate. A monster storm and this narrow waterway giving us nowhere to run.

We received a call from the Race Direction, and they told us to stop and wait for the storm for our own safety. I do not remember that ever happening in a race before where the organisers tell you to wait out the weather. Arnaud Bossieres and I waited it out at Cape Horn and Brian Thompson found shelter at Estados Islands. I remember charging my batteries putting in three reefs in the mainsail and tidying up the sail on the boom, putting my storm jib up and doing some checks around the deck. 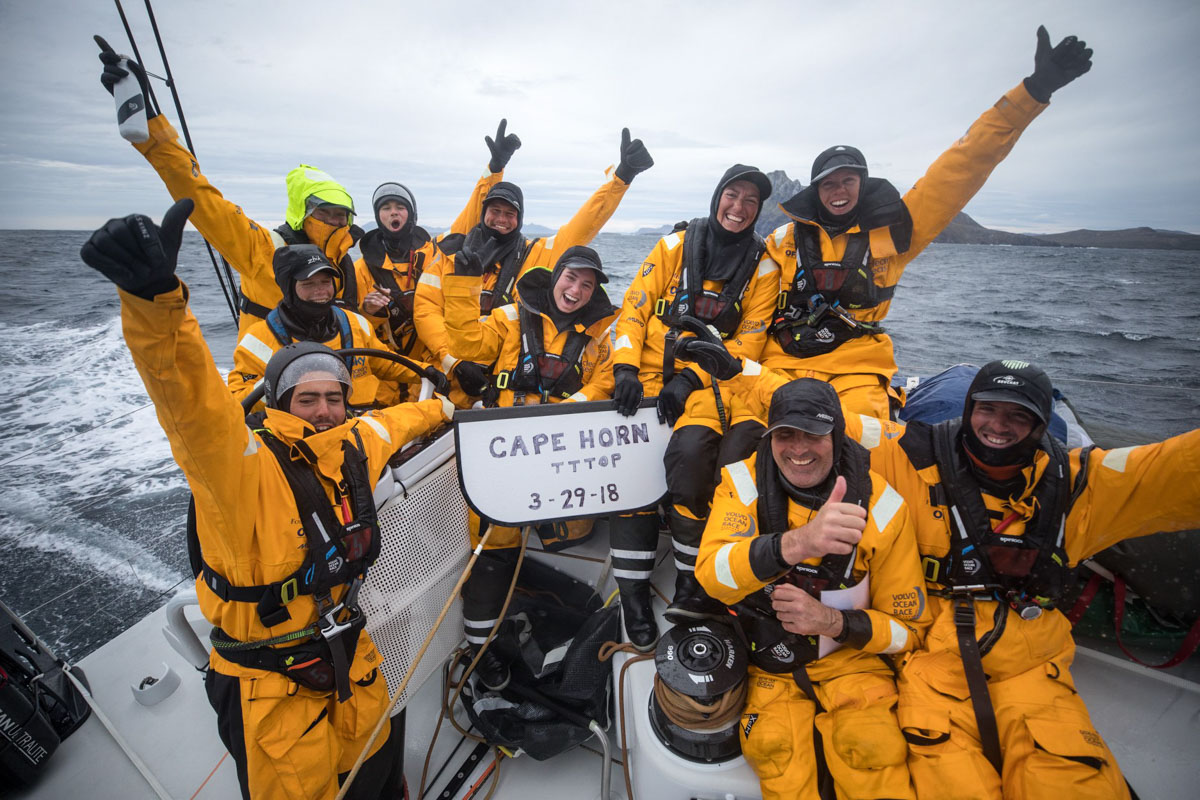 Keep on keeping on

I ate a good meal and made a hot drink and then afraid that I would be left behind by the others I started to press on towards La Maire Straits and my journey up the Atlantic. The maximum wind speed I saw was 60 knots and this was less than the storm we felt the effects of on our approaches to Cape Horn a few days before, where we saw 68 knots and I had to do my final gybe towards Cape Horn in 50 knots of wind.

Once the storm threat had passed and we were safe in the Atlantic, I spoke with Brian Thompson and he had seen 75 knots of wind and the wind speed recorded across Tierra del Fuego that night in question was 88 knots of wind. So, it was the right call, but it did feel quite strange. In the depths of the Southern Pacific Ocean there is a geographical location, called Point Nemo. This point marks the Ocean Pole of inaccessibility. It is the furthest point from land you can get and the closest person to you is in the International Space Station. It is the most remote you can ever be on the planet and a stark reminder to the sailors that they are alone out there. Normally we see the fleet stretched out across the oceans with thousands of miles between the groups, yet the nice thing about this edition of the Vendee Globe is the fact that the fleet is so close.

There is every chance that there will only be a couple of hours between boats at Cape Horn and this sets us up for a super competitive Atlantic race to the finish line where the current prediction is for many boats to be finishing during the final week of January 2021.

The fleet is over halfway and so they are in effect sailing home, reducing the miles all the time. I do not think you feel as if you have cracked the back of the race until you are clear of Cape Horn. The fact that once back in the Atlantic the weather warms up, the sea temperature rises, the weather is less severe, and everything feels easier. Rescue is closer and there is evidence of life and shipping routes giving you greater confidence of others that could come to your rescue, if necessary. 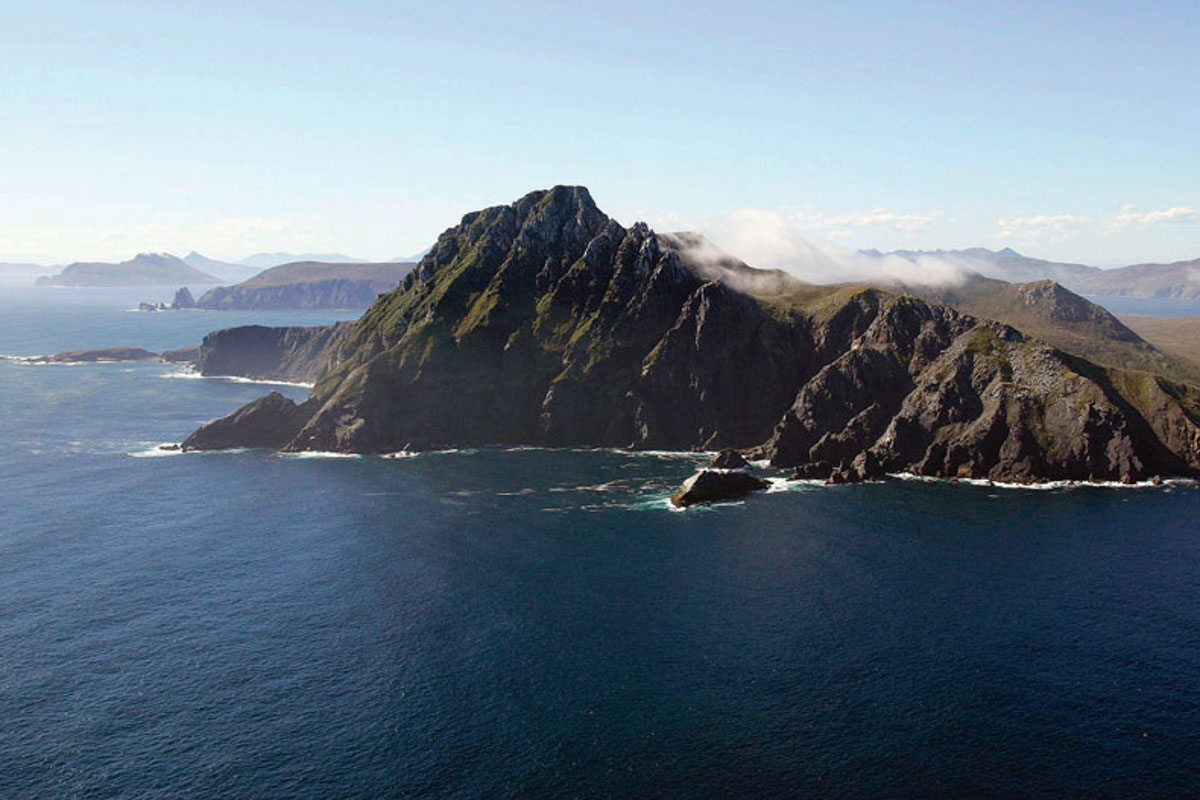 It is not a time to be overconfident, there are still 7000 miles to sail to the finish line and the weather patterns are often more difficult to manage. There is some more upwind sailing to be done, there are the dreaded doldrums to cross and more high-pressure zones positioned between you and the finish line. However, survival of the Southern Ocean and a thorough check of you boat normally gives you confidence to push your boat a little harder on the way back north

Your confidence in your own ability and the boats ability has grown and therefore how you sail your boat on that final Atlantic run north often changes. You are willing to push a bit harder and faster and with the fleet so close this could be the difference of several places in the final rankings. That said completion of this race is a win in everyone’s book and we will continue cheering all those that took part. 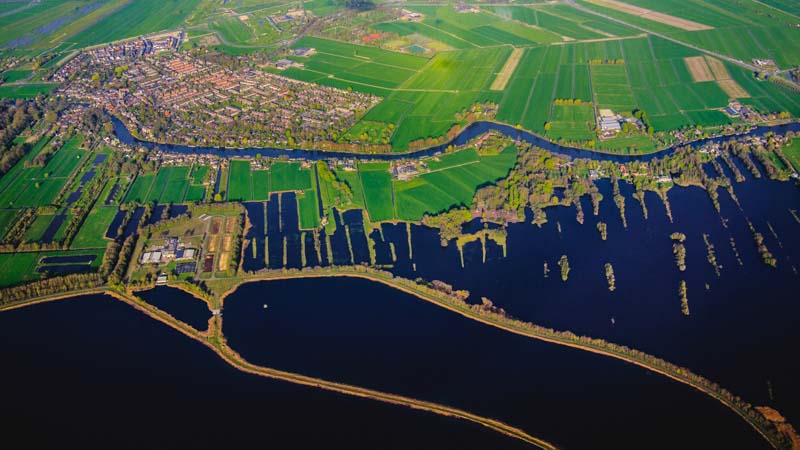 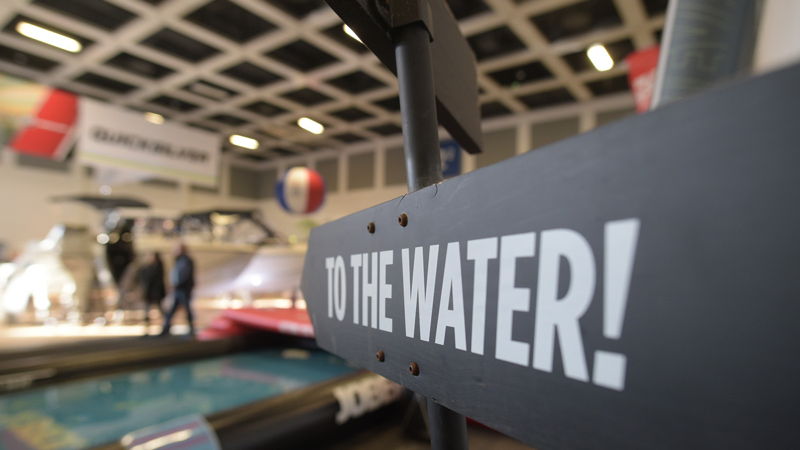